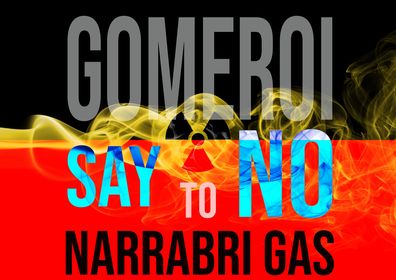 In a declaration of war against the cultural heritage of the Gomeroi Traditional Owners of the Pilliga Forest, Santos Ltd will challenge the Gomeroi Nation in the Native Title Tribunal at the Federal Court on 8 April 2022 over an overwhelming decision by the Nation to block the Narrabri Pilliga Gas Project. The decision at the Meeting of the Nation from 22 to 25 March 2022 showed that support for Santos within the Gomeroi is extremely small in numbers.

Gomeroi Native Title applicants have called on Santos to abandon its coal seam gas plan to build 850 wells, mostly in the Pilliga Forest. Among those, Raymond “Bubbly” Weatherall said:

“This strong no vote today is a continuation of our long struggle against Santos and the state and federal governments who are trying to desecrate our lands. Santos must respect our decision and immediately withdraw their ‘Future Act Determination Application’ in the Native Title Tribunal. This is seeking permission to strip us of our rights and usurp our Country regardless of our decision today.

In the Tribunal, Santos are arguing that over-riding our rights is in the ‘public interest’, but Gomeroi are fighting for everyone’s future. At COP26 we saw Santos pushing for continued extraction of fossil fuels across the world in the middle of a climate emergency. This project would also pollute the waters of the Great Artesian Basin. We are sovereign people and we calling on all people to get behind us and stop Santos”.

Raymond Weatherell and other Gomeroi who gathered in Tamworth for the Meeting of the Nation consider that the Pilliga Forest is a significant cultural place in its entirety.

The Pilliga Forest is a significant cultural place in its entirety, not just isolated places of archaeological or historical significance.

A small but vocal minority have taken a different view, backing a report commissioned by Narrabri Shire Council, the Narrabri Aboriginal Cultural Heritage Study, Stage 1, which found that there are just eight sites in the entire Narrabri Shire of cultural significance sufficient to warrant registering.

In 2021, the NSW Planning Secretary appointed a controversial archaeological consultancy, Oz Ark Environment and Heritage, to the Aboriginal Cultural Heritage Advisory Group for Santos’ Narrabri Gas Project. Oz Ark Environment and Heritage, based in Dubbo, was also responsible for a heritage report on Whitehaven Coal’s Maules Creek mine which was found to be fallacious and possibly defamatory to local community opposed to the coal mine and was withdrawn from the Department of Planning, Industry and Environment website.

The disgraced consultancy is also the author of the Narrabri Aboriginal Cultural Heritage Study, Stage 1.

In the Oz Ark report, which informed the Aboriginal Cultural Heritage Advisory Group for Santos’ Narrabri Gas Project, the consultants have cherry-picked a few well-known sites such as Dripping Rock and Gin’s Leap, and sites of post-colonial history like the Bohena Mission, ensuring that no areas on Santos gas field footprint are included as “significant”.

Knowledge holder and spokesperson of Coonabarabran Elders, Sue Ellen Tighe, reinforced the importance of the Pilliga Forest in its entirety, and said after the Meeting of the Nation:

“We have said clearly as a Nation – hell no Santos, get out of our Country! The Pilliga is so important to us culturally and spiritually. We refuse to allow Santos and the Morrison government to sacrifice the Gomeroi Nation and our sites for the financial benefit of a global conglomerate, it’s just reprehensible.

Gomeroi have stood up and united in defence of our culture and special places. Now we need support from non-Indigenous people too, it will be a long hard battle to defeat this company – we will march the streets, we will camp outside Parliament, I am calling all people across Australia to action to our vote is respected”.

Oz Ark conducted no on-ground investigations, and relied on phone interviews with a small number of individuals who supported the claim of only eight significant sites in the entire Narrabri.

Despite the questionable cultural research being relied on by Santos, the Future Act Determination will now proceed to a Native Title Tribunal hearing. The Oz Ark report is part of Santos’ strategy to defeat the Gomeroi nation under section 39 of the Native Title Act 1993 (Commonwealth), which  requires the tribunal to take into account “any area or site, on the land or waters concerned, of particular significance to the native title parties in accordance with their traditions”.

Thus Santos is expected to tell the Native Title Tribunal that The Pilliga is not of particular significance.

The Native Title Act s 31 also dictates that the parties must act in “Good Faith”. It is expected that the Good Faith requirement will be a central issue at the tribunal hearing on Friday, 8 April 2022.

On 8 April 2022, there is a planned rally at the Native Title Tribunal at the Federal Court, 184 Philip Street, Sydney to raise public awareness of Santos’ attempt to use Native Title legislation to beat down the Gomeroi Nation decision to oppose Santos in The Pilliga. The matter will be heard in Court One.

If you would like to sign the petition and to be keep updated about Santos’ war against Gomeroi culture and heritage, you can sign this petition: