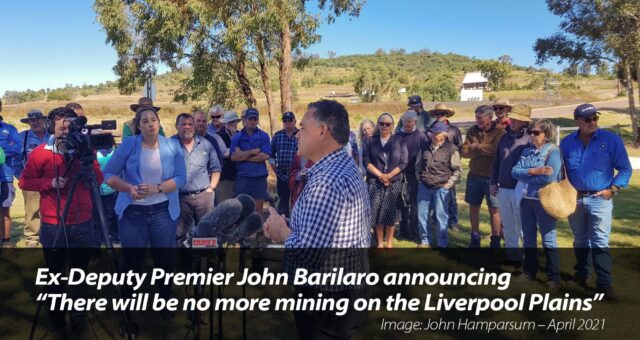 The NSW Government has sent a clear signal to would-be investors in the coal seam gas industry in NSW by slashing 77% off the area designated for exploration. Just four Petroleum Exploration Licences (PELs) out of 12 have quietly been renewed by Deputy Premier and Resources Minister Paul Toole MP, a Government backflip that has placed some of the best agricultural country in Australia under gas exploration licences.

Minister Toole chose the day before Easter to renew the hugely controversial Liverpool Plains PELs 1 & 12 and the Pilliga Narrabri Gas Project PEL 238, then on the day before the Federal Election the shape change and renewal of PEL 427 was quietly made public.

A year later the NSW government appeared to capitulate to Santos by renewing PELs 1 & 12 that cover Prime Agricultural Land in NSW.

It also seems apparent that Barilaro told a bold-face lie in order to help get David Layzell elected in the Upper Hunter by-election.

However, it is not all bad news. The current incarnation of the Future of Gas Statement has revealed a substantial win for community as the area under threat from coal seam gas mining has been reduced by 77% since 2020. As seen from the mapping below, the area under gas exploration has been reduced to a tiny fraction of what it was over eleven years ago.

After gaining approval nearly two years ago Santos has not commenced Phase 1 operations. The 2021 Annual Review required by Condition D8 is a one page letter providing information on the project status and is at pains to point out that Santos have not begun the time-limited Phase 1. In the letter to the Steve O’Donoghue, Director of Resource Assessments, Department of Planning and Environment, Santos said it had spent “the last 12 months” developing management plans.


The Minimum Standards are clear that “there must continue to be active work undertaken” on all titles even if they are contiguous with active titles. This is NSW’s “use it or lose it” policy which “requires title holders to commit to developing the State’s resources or risk losing their prospecting title. If a serious commitment cannot be demonstrated at application, transfer, upon renewal or during the term of a prospecting title, companies may face refusal or cancellation of their titles.”

Petroleum title holders are required to comply with the provisions of the Petroleum Minimum Standards and Merit Assessment Procedure and failure to comply is grounds for not renewing titles under clause 3 of Schedule 1B of the Petroleum (Onshore) Act 1991.

Comet Ridge had PELs 6 and 428 cancelled and have held onto PEL 427 with a drastic reduction in size. Carbon Minerals is the Santos joint venture partner for PELs 1 & 12.

It is not clear what due diligence was conducted by Minister Toole to ensure that the renewal of PELs 1, 12 and 427 fulfilled the legislated requirements.

The NSW Government’s renewal of the “zombie” licences is a public relations disaster in the making for Santos and its partners who are defying the objections of Gomeroi/Gamilaraay Traditional Owners and the unshakeable farmers of the Liverpool Plains.

The Dominic Perrottet-led NSW government has ignored groups such as the NSW Country Women’s Association and the NSW Farmers Associations who stand firmly opposed to coal seam gas mining.

The recent Santos AGM held in early May failed to engender confidence in the Pilliga Narrabri Gas Project. The company faced question after question and the executive did little to shore up investor confidence. When questioned on the apparent high CO2, Chairman Keith Spence and CEO Kevin Gallagher chose obfuscation over fact, misleading the room to believe that 5% CO2 over the life of the project was predicted, when in fact the CO2 will increase to around 30% as pressure drops and CO2 becomes “unstuck” from the coal.

Reduced exploration licences, timeline blowouts and the changing political landscape are just a few of the factors leading to a cloud of uncertainty over the future of gasfields in NSW.