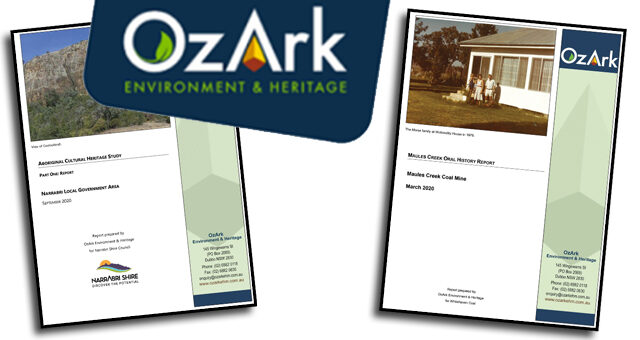 This, in the face of two previous Oz Ark reports in the Narrabri region receiving scathing criticism for inaccuracy and inadequate consultation, one of which – the Maules Creek Oral History  – was removed from the website of the NSW Department of Planning, Industry and Environment following complaints from the public.

Condition B58 of the Narrabri Gas Project approval makes it clear under “Notes” that “The Aboriginal Cultural Heritage Advisory Group is an advisory committee only and has no compliance or enforcement functions.” The Advisory Group is a meaningless condition with no consequences, and a mere tick-a-box to help passify public outrage over the violation of Gomeroi cultural values by the Narrabri Gas Project.

Nevertheless, 46% of the Narrabri Gas Project area is under the Gomeroi Native Title claim, and Santos is pressing for the traditional owners to approve the project.

Many Aboriginal people are deeply offended by being excluded from meaningful input into the protection of culturally significant places in the Pilliga Forest, the ancestral land of the Gomeroi. They argue that the current planning system, in which mining companies like Santos can cherry-pick which Registered Aboriginal Parties they will consult, allows people with lesser connection to country, and with less cultural knowledge, to represent the cultural interests of the Gomeroi.

Gomeroi Aboriginal community members from Narrabri, Coonabarabran and Pilliga town attended the “Back to Biliga” workshop at the Uniting Church Hall, Narrabri on 12th March where they expressed dismay, not only about the appointment of Oz Ark to the Advisory Group, but the Oz Ark-authored Narrabri Council commissioned Aboriginal Cultural Heritage Study Part One report, which concluded only 8 sites in the entire shire are worthy of listing under the Narrabri Local Environment Plan, four of which are Aboriginal Reserves (of which Pilliga Mission is erroneously categorised as a “Reserve”).

The Department of Planning, Industry and Environment claims “Santos consulted with Registered Aboriginal Parties regarding the establishment of the Advisory group” but some Native Title claimants and Gomeroi community say the first they heard of the Advisory Group was when the formation was announced as completed by the Department. Moreover the membership of the Advisory Group does not represent the interests of Gomeroi archaeology and culture, with three of the seven members being Narrabri Local Aboriginal Land Council or Wee Waa LALC representatives whose primary remit is the provision of social housing and approval of land dealings, not cultural education.

The Maules Creek Oral History has been followed by Oz Ark’s next cultural heritage fail, the Narrabri Aboriginal Cultural Heritage Study. This was prepared by Dr Alyce Cameron, Senior Archaeologist.

Oz Ark says its objective was to “meaningfully consult” with the Aboriginal community, but  the report states that the consultancy relied on phone calls and emails and did not rely on a survey and no site visits were conducted.

Finding culturally-significant locations in Santos’ 850-well gas field is significant because the presence of high value Aboriginal sites could influence the Field Development Plan, which determines where drilling will take place and well pads will be constructed.

Oz Ark’s role in artificially constraining truth-telling of  the Maules Creek Oral History and the subsequent reporting of Gomeroi heritage in the Santos project footprint show that this consultancy is not a suitable party to represent the scientific community on the Aboriginal Cultural Heritage Advisory Group for Santos’ Narrabri Gas Project.

Questions remain over whether Planning Secretary Jim Betts was properly briefed before he approved this consultancy to the Advisory Group and whether in the circumstances described above, Oz Ark satisfies the quality assurance standards for State significant projects which recognises certain accredited professional schemes for environmental assessment practitioners. A letter confirming the appointment of Oz Ark is signed by Stephen O’Donoghue, Director, Resource Assessments. Whilst the Advisory Group is not a decision-making body, nevertheless the presence of Oz Ark in the Group is an ill-deserved grant of professional respect by DPIE.

Oz Ark’s credibility faced a challenge last March when the Dubbo-based consultancy published the Maules Creek Oral History Report, in which 7 out of the 8 oral history interviews were conducted by Whitehaven Coal’s own Security Manager at the mine, Mick Heap, who later was recruited to conduct security services for Adani in Queensland.

Relations between Whitehaven Coal and the community were inflamed during the Leard Blockade, which saw over 400 people arrested for trying to prevent the Maules Creek mine from proceeding, during which Mick Heap directed the security regime along with security consultancy Verifact. Private security were responsible for at least one known assault of a protestor by security guards on private land at a farm at Maules Creek and the intrusion on private property using night-vision goggles. Subsequently Whitehaven Coal re-named Mick Heap, a former policeman and part-time landscaping supplies operator from Tweed Heads, as Community Relations Manager whereupon he was engaged to compile an oral history of the area affected by the mine in fulfilment of Commitment 22 of the Maules Creek Coal Mine Project Approval.

The Maules Creek oral history contained a range of outrageous deficiencies for a professional report, from being off-topic (extensive discussion about the dancing school once operated by the former wife of a man who made a bonanza selling out to Whitehaven Coal) to some outrageous character assassinations of local residents near to the mine. All but one interview were with farmers who sold out to Whitehaven.

There were no voices of the farmers and their families left to face the mess from Maules Creek mine: dust pollution, frequent nearby blasting, ground water depletion and fracturing of the fabric of the community. The local K-6 school, Fairfax Public is on the brink of closure due to shrinking of pupil numbers as farming families move out, often their once-loved homesteads being used by drive-in drive-out mine personnel.

The story of the Murphy family from “Blue Range” was not included in the oral history even though it was of such significance it warranted being the subject of an ABC Australian Story episode Limbo Land. The story of the arrest of Maules Creek farmer Rick Laird in a high-profile lock-on with former Wallabies Captain David Pocock in November 2014 did not warrant a mention.

Oz Ark’s oral history does not reflect the brief. This report was a sub-standard cultural history, which included personal attacks. It is no longer publicly available online. If the Maules Creek Oral History was so bad it had to be removed from the Departmental website, we wonder where that leaves Whitehaven’s Commitment 22, and if the Oral History be required to be revised.

DPIE’s new professional scheme introduced under the Rapid Assessment Framework is supposed to “increase public confidence in the planning system”.