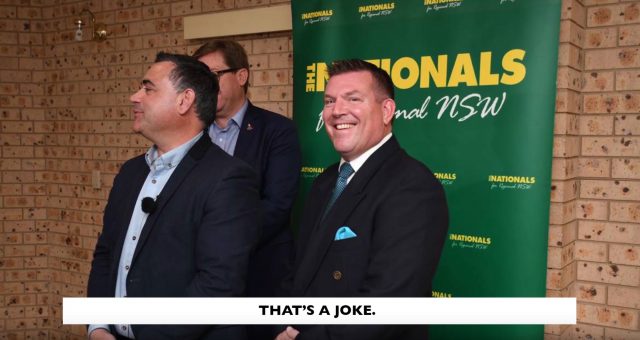 Broken promises of the NSW Nationals Party bubbled to the surface during Parliamentary debates over the CSG Moratorium Bill. The bill passed in the NSW Legislative Council in early June, but was defeated in the Legislative Assembly after the ruling Liberal and National Party coalition withheld support of it. The Nationals have also gone to great lengths to stymie the Chief Scientist’s Recommendations on CSG, arguing that they were never intended to apply to the Narrabri Gas project, and were only intended if NSW had a full-blown CSG industry (from 7 mins).

“I am proud to say that I do not support any extractive industry across the state that has a possible impact on water or livelihood or communities.”

“I would happily support the rest of the PELS [Petroleum Exploration Licences] being cancelled completely. I’m pretty clear about where I stand and I would support those other gasfields or those other PELS being put to bed.”

“I’d be happy to fight tooth and nail to make that party policy.”

Having won the seat of Dubbo, Dugald Saunders has walked away from his promises to the people of Dubbo. The city, famous for Taronga Western Plains Zoo, nearly ran out of water to support its population of 40,000 last summer and water security is a major concern there, as it is across the vast majority of north western communities.

Gone is Mr Saunders’ promise to “fight tooth and nail” to extinguish the rest of the coal seam gas PELs in NSW and make it Nationals policy.

During Parliamentary debates over the CSG Moratorium Bill, there was no recognition from the Liberals and Nationals that the Chief Scientist’s recommendations are needed to ensure the CSG industry does not cause irreversible and catastrophic impacts on the Great Artesian Basin, and other aquifers, also to ensure there is appropriate insurance against such harms.

Instead, Parliament was treated to a rambling under-informed turn-around, in which Mr Saunders completely reneged on his previously strongly expressed position and appeared to feign ignorance of Santos’ expansion plans.

Narrabri Gas Project is only Stage 1 of the roll-out of the CSG industry  throughout NSW, even though moves are afoot by the companies Carbon Minerals (ASX:CRM) and Comet Ridge (ASX:COI) to commence fresh exploration of PEL 1 & 12 imminently.

These PELs cover a huge expanse of the north-west. This farming region is regarded world-wide as an agricultural treasure. These PELs must stand first in line to be extinguished, out of all the “zombie” licences remaining in NSW.

People of Dubbo rightly expect their Parliamentary representative to protect water. If Mr Saunders fails in this, the seat of Dubbo will be in line to fall to candidates like Roy Butler (Barwon) and Helen Dalton (Murray) from the Shooters, Fishers and Farmers Party, who place water security front and centre of their policies.

The lack of knowledge shown by NSW National’s leader John Barilaro during both the Parliamentary Inquiry into the Chief Scientist’s Recommendations (he knew no details and purported – falsely – that the recommendations had been implemented) and the CSG Moratorium Bill debates, was stultifying. He displayed a startling ignorance on every level, about the risks posed by coal seam gas to groundwater, the unanswered questions about toxic waste disposal, and lack of insurance against the industry.

On the other hand, contributions to the debate from Shooters Farmers and Fishers, Labor, Greens, Animal Justice and some independents showed that putting aside hyper-partisan politics produces wins for the interests of the people of NSW by exposing the broken promises of those whose nuts are held in a vice by Santos and the gas industry.