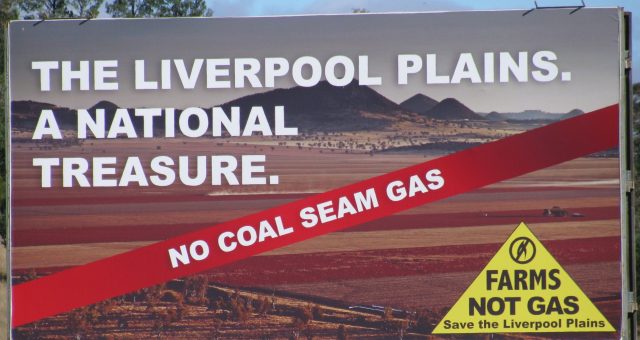 Carbon Minerals has recently informed shareholders and the ASX that they intend to pursue a works program in 2020 that includes bringing in a workover rig to attend to four coal seam gas wells within PEL 1 & PEL 12 and the installation of relevant infrastructure to enable production testing for up to six months and 2D seismic work. The company has flagged for this work to occur throughout 2020 with the onground activity to commence in Quarter 3, 2020.

Santos have a strong 65% interest in the Petroleum Exploration Licences and this recent communication from Carbon Minerals suggests that Santos are still very much interested in the Liverpool Plains despite saying otherwise publicly:

Carbon Minerals has stated that it expects that NSW PEL titles it holds will be renewed by the end of Quarter 2, 2020. We have a clear case here of two public companies involved in the same venture contradicting each other. At least one of them is not disclosing honestly to its shareholders.

Carbon Minerals is owned by former NSW Planning Assessment Commission member Marcus Lincoln-Smith who has repeated the industry mantra over the years that “Farming and coal seam gas can co-exist” despite evidence from the 12 year Queensland experience that where this occurs, they only co-exist with extreme detriment to agriculture.

Carbon Minerals listed on the ASX in 1980 and has has been involved in a range of energy, base and precious metals exploration throughout Australia, but since 1990 has concentrated on coal seam gas exploration – mainly in NSW, and mainly in the Gunnedah Basin via its wholly-owned subsidiary, Australian Coalbed Methane Pty Limited (ACM).

The Lincoln-Smith Family are linked to the oil and gas industry through Paul (Marcus’s deceased father) who was a friend of Frank Nugan of Nugan Hand Bank infamy. Marcus has a strong science background in the area of marine biology, he formed the company The Ecology Lab, which industry giant Cardno acquired in 2008. He remains a specialist consultant and Senior Principal in the Water and Environment team for Cardno and was involved with the botched dredging of the Gladstone Harbour for LNG boats.

A Biogenic Fairway contains gas produced by microbial action within relatively shallow seams. One is known to exist in the area to the south-west of Gunnedah (see map below). The Biogenic fairway was discovered in 2004 and seems to be the only target of any real value across PELs 1 and 12 with many of the exploration wells showing low CH4 and high CO2, a problem that detracts from the economic viability of the Narrabri Gas Project as well.

“Much of the coal in the Gunnedah Basin is not at optimum maturity and furthermore during geological history some of the original thermogenic gas has escaped.”

The source of the methane B(biogenic) is the primary target for Carbon Minerals/Santos, but the issue across the PELs of the CO2 found away from the biogenic fairway can not be discounted. Tabled below is some of the publicly available data.

A 2012 map of PELs 1 and 12 (above) includes the Queensland Hunter Gas Pipeline which has recently been resurrected and has been approved as Critical State Significant Infrastructure. The pipeline skirts the eastern edge of PEL 1 (gray dashed line). Landowners have been left in the dark regarding this pipeline as there has been almost no correspondence between landholders and the company behind the project, Queensland Hunter Pipeline, during the extended timeframe, led farmers to believe the project had lapsed.

Carbon Minerals was contacted for more details and a timeframe for their works program. The enquiry was then forwarded to Santos who responded quickly. The response is at odds with what Carbon Minerals tell their shareholders and investors in their Works Program.

Santos indicates that they have no further updates on the proposed PELs 1 and 12 works program and it could be some months before they do.

In late March 2020 Carbon Minerals published on their website a Notice indicating an unsecured loan facility agreement with Palmarc Investments Pty Limited for the purposes of working capital and  will host it’s AGM in Sydney on the 27th May 2020.

The companies seem to be giving mixed messages in regards to the upcoming works program and unfortunately, Carbon Minerals appears to be a passive partner to Santos – hostage to the same community opposition and with the same variable CO2 and NOx gas throughout PEL 1 and PEL 12 which make the whole premise for developing this energy source unfeasible.