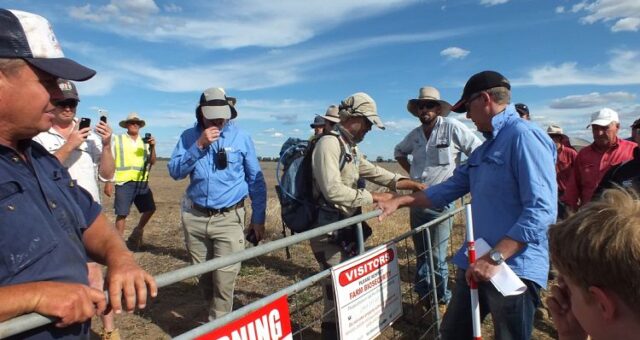 Santos contractor the APA Group ($APA:ASX) has quietly revived its East Coast gas ambitions after an earlier failed attempt to begin the Western Slopes Pipeline. The company faced united community opposition from Coonamble and surrounds in 2017-2018 as it tried to conduct surveys to inform its Environmental Impact Assessment. Accused of trespass by landowners along the proposed pipeline route and of breaching the Agreed Principles of Land Access Memorandum of Understanding entered into by Santos in 2014, APA failed to lodge its EIS by the May 4th 2021 as required by the NSW Planning Department.

Recently, the Chair of the Western Slopes Pipeline CCC sent this email to CCC members – it failed to disclose APA’s true intentions:

It has been sometime since I last contacted you – November 2018 in fact. At that time APA advised that it intended to delay lodgement of the EIS for the pipeline project until the application for the Narrabri Gas Project had been determined.

I will keep you advised of any developments in respect of the pipeline project.

Shortly after this email was sent it was announced by the company they were to commence a 25% expansion of the east coast grid and a deal with Origin Energy. Costing an estimated $270 million, the expansion claims it will increase the grid’s peak capacity by 25% in the winter through additional compression and associated works on the South West Queensland Pipeline (SWQP) and the Moomba Sydney Pipeline (MSP).  APA also announced a significant new East Coast Grid gas transportation agreement (GTA) with Origin Energy Ltd.

APA have several gas pipeline projects under development. Note that APA has stated that none of these pipelines (which don’t create any more gas, just increase the cost of moving it around) would be necessary if an LNG import terminal was to proceed.

“Absent any proposed LNG Import Facility or material development in the south, there will be more reliance on supplies from Queensland and the Cooper Basin to meet New South Wales, South Australian and Victorian gas demand” (https://www.apa.com.au/news/media-statements/2020/apa-response-to-2020-gsoo/)

An LNG import terminal would cost less than APA’s proposed expansion AND would ensure that gas volumes into the market actually increased. APA’s proposal will simply burden the domestic gas volumes with higher costs.

APA’s unnecessary projects in the works include:

New Secretary Environmental Assessment Requirements (SEARs) have now been issued for the APA Western Slopes Pipeline and the company says “APA will lodge a Modification Report for Stages 1 and 2 with the New South Wales Department of Planning, Industry and Environment (DPIE) under Section 5.25 of the Environmental Planning and Assessment Act 1979. Stage 3 approvals will be sought by way of a separate Modification Report.

A Modification Report is required for State Significant Infrastructure, such as the Moomba Wilton Pipeline. The Modification Report describes how the project will be constructed, operated, maintained and decommissioned in an environmentally and socially responsible way. Pending approval through DPIE, an application for a variation to the Pipeline Licence will be sought.”

Another proposed portfolio item for APA is the Kurri Kurri Lateral Pipeline project, a 42 inch high pressure gas transmission pipeline linking Hunter Power Project at Kurri Kurri, in New South Wales, to the existing Sydney to Newcastle pipeline. A scoping report was lodged with the Department in June 2021 and can be viewed here:

All transparent market analyses show that the Kurri Kurri gas plant is not required and is huge waste of taxpayers money.

This modification which is currently in the preparation stage comprises the installation of two compressor stations on the Moomba to Wilton Pipeline.

Barilaro and the Future of Gas

Communities across NSW are waiting for the release of new mapping of Petroleum tenures and the Future of Gas Statement from Minister for Resources and Regional NSW John Barilaro. They are calling on expired Petroleum Exploration Licences (PELs) to be cancelled state-wide but Nationals MPs have given varying indications of which expired “Zombie” PELs would be extinguished, if any.

Our story: Barilaro attempts to push NSW into Queensland-style “co-existence” with gas

It looks highly likely that while some may be cancelled others will be granted, possibly in Far West NSW adjacent to the existing Moomba APA pipeline. Like Narrabri, this area is part of Barwon electorate, lost to the Nationals for the first time since the 1960s when Shooters, Fishers and Farmers candidate Roy Butler MP took the seat.

Barwon could be seen as electorally dispensable especially as Butler’s popularity would appear to be increasing, rather than the reverse , due to his much praised performance in office.

Carbon Minerals is one of Santos’ Joint venture partners, with an interest in expired PELs 1 and 12. Will Barilaro stand up for the once Nationals heartland of the Liverpool Plains, or will the Nationals leader risk losing more NSW State seats in Parliament to satisfy the gas industry?

Despite the surge in cost-effective renewables and battery storage, higher-cost gas projects and proposals in Queensland and NSW continue to be approved. We also know that export contracts continue to need to be satisfied at the same time. We cannot move forward to a zero emissions future whilst the gas industry continues to proliferate and spread. We also cannot risk losing any more groundwater to the gas industry.

There is no doubt that while communities grapple with the social and economic impacts of the COVID-19 pandemic, the gas industry has taken advantage of the plight of the nation to push new gas fields, unnecessary gas generation and additional pipelines and infrastructure even while the insurance issues and other Chief Scientist’s recommendations remain unmet.

As Tony Windsor famously told a packed Coonamble Bowling Club on the day of the Coonamble Declaration, “The snake is not dead until the sun sets.”