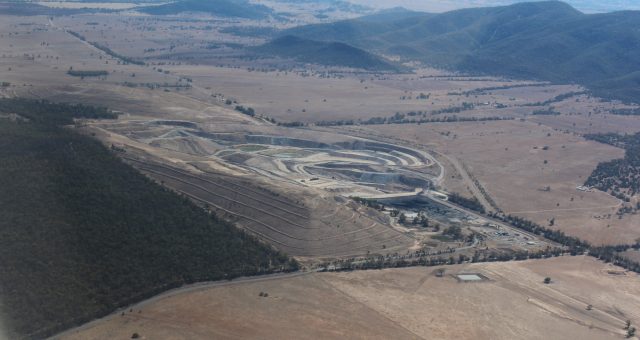 Image: Rocglen Mine, situated on the floodplain with the Nandewar Ranges to the east (top) and Vickery State Forest to the west (left of pic) Pic courtesy of Wando Conservation and Cultural Centre Inc, Maules Creek.

WCM pleaded guilty to offences including including allowing dangerous NOx gases to escape from the site into surrounding farmland, and breaches of the Blast Management Plan, such as carrying out a blast without a written risk assessment being undertaken, using explosive products which increased the risk of blast fume generation in the conditions, and overloading blast holes with explosives.

“[139] The principal danger associated with NOx gases is a potential to cause harm to biological organisms from that nitrous oxide which, when combined with water, forms nitric acid. In terms of harm to humans and animals, the primary health impacts arising due to NOx exposure can involve irritation to eyes,a lungs, skin, and mucosa, by acid burns and in more extreme incidents of exposure, damage to those organs. The health impacts to humans and animals from direct exposure can range from mild to fatal.”

But the fine of $35,800 was reduced from a higher sum, due in part to the Judge’s conclusion that WCM is “a corporate citizen of good character”.

For those familiar with the track record of the parent company Whitehaven Coal Ltd and the history of the Maules Creek mine, and Gunnedah Coal Washery and processing plant, this aspect of the Judgment was disappointing. The Court was not permitted to take into consideration the environmental track record of Maules Creek mine, nor such other evidence as Chief Executive Officer Paul Flynn’s blatant mistruths to the 2017 Annual General Meeting where he blamed the reclassification of the mine’s risk level on just one farmer complaining for financial motives so he could get a higher price for his property. Many submissions against the Vickery coal mine have also argued against the eligibility of Whitehaven Coal on the grounds of “not fit and proper” to hold an environmental licence.

However, the Judge was not allowed to consider the long list of grievances, licence violations, cautions and other regulatory action against Whitehaven Coal because Rocglen licence is held by WCM. Therefore, even though it is a wholly owned subsidiary, the conduct of other companies in the Whitehaven group is not to be considered.

Nor did Judge Pepper hear about some of the personal stories of some farming neighbours such as the Nicholls’, who in 2014 complained bitterly about their plight living within 24km of three Whitehaven mines in the area.

WF and SE Nicholls spoke about the impacts of several nearby Whitehaven coal mines on their farm property “Brolga” in their submission against Whitehaven’s Vickery mine in 2014:

“Blasting. Our house has already been shaken by blasting operations from Canyon 12 km, Rocglen 7 km, Tarrawonga 24 km  on numerous occasions. We absolutely and utterly object that this is already occurring and note that with 5 & 6  blasts per week from Vickery that our house can be expected to fall to pieces over a 30 year period. This is not a reasonable position for any neighbour to have to contend with. The underlying strata is carrying blasting vibrations our direction and the Vickery forest between us and Tarrawonga has offered no protection. …

Despite lodging formal objections Whitehaven does not want to know anything about problems arising from their blasting operations and conveniently dismiss by passing responsibility to who claim no criteria had been exceeded. Due to the distances involved this just cannot be correct. …

This is a disastrous position for anybody to be placed in. With over 8,000 blasts to be expected over the life of the [Vickery]  mine it is no wonder we have come to that conclusion.”

Faced with a fourth mine impacting them (they did not include Maules Creek and Boggabri coal mines) the Nicholls concluded, “we are too close to such a major mining development, effectively 100% within the 4 km zone from the mine”.

However, there is one publication where news of the conviction will not be notified – and that is the company’s own Annual Report.

Whitehaven “strenuously” resisted attempts by the EPA to persuade the Land and Environment Court to order details of the conviction be published in the parent company’s Annual Report. The offender has thereby limited the degree to which Whitehaven Coal shareholders would be made aware of the conviction. Whitehaven argued that this would be “excessive punishment”.

Indeed, news that another Whitehaven coal mine or processing plant is being cautioned, fined, or subjected to a mandatory environmental audit or clean up order, certainly could have a tendency to undermine confidence in Whitehaven Coal.

The company is to place public notices within the first 5 pages of the following publications, at a minimum size of 9 cm x 12 cm, within 28 days of the date of the order:

Business as Usual at Whitehaven mines

Will this conviction make a difference to  the culture within the Whitehaven Coal group change?

In order to save one day of production time at  a small, relatively insignificant mine, Whitehaven set in train a botched blast. None of this would have happened if they had waited for one day. Imagine the pressure to keep production going at Maules Creek, which is at least five times larger.

There is no practical distinction between WCL and WCM. The same people staff the mines and are moved about from time-to-time.

It is very unlikely that this offence will change how things are done at Whitehaven mines. But Whitehaven may regret that they broke with their usual “never admit anything” credo by self-reporting this offence.