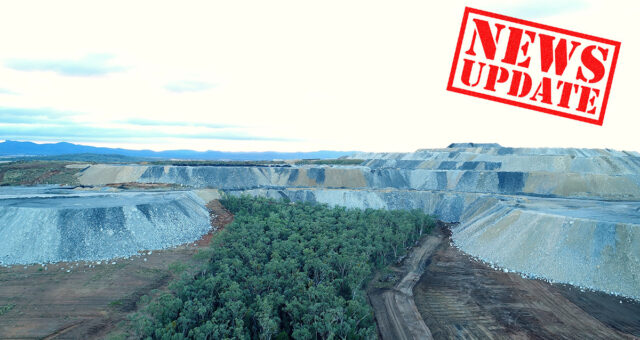 The NSW EPA has been captured by the coal industry in north west NSW, giving the OK to conduct mass burial of mining tyres in the Leard Forest Precinct, the ancestral lands of the Gomeroi traditional owners, while the NSW Aboriginal Land Council stalls the application.

Under current Chief Executive Officer Tracy Mackey, the NSW EPA has recently supported applications by miner Whitehaven Coal in the Narrabri region which raises alarm over the agency’s understanding of its own role under its founding legislation. Two of Whitehaven Coal’s Namoi Valley mines Werris Creek and Tarrawonga – have already been granted NSW EPA’s blessing to bury end of life mining tyres, many of which weigh over 4 tonnes each.

The EPA gave no objection to the applications of Werris Creek and Tarrawonga mines, despite also penalising them with official cautions for historic landfilling of tyres within the open cuts.

More recently, the largest open cut coal mine in the north-west Maules Creek also sought approval to modify its consent conditions and environmental licence to legitimise the mass burial of mining off-the-road or “OTR” tyres for the remaining life of the mine.

This push by the mining industry comes at the same time that Tyre Stewardship Australia announced a landmark tyre stewardship scheme starting on 1 January 2022 in which both of Whitehaven Coal’s suppliers, Bridgestone and Michelin, are founding parties.

In its report OTR Tyres in Australia: A case for change to sustainably manage used of-the-road (OTR) tyres in Australia, Tyre Stewardship Australia says over 90% of OTR mining tyres (of which over 60% are from mining) are landfilled, and said we are at a critical juncture where industry practices should change.

“Australia is at a critical juncture in creating a circular economy for OTR tyres. It is time for the sector and industry to take responsibility and work with TSA to improve outcomes for end-of-life tyres and tyre products.”

Despite this timing, the NSW EPA in its agency advice to Maules Creek Modification 8 in October 2021, gives Whitehaven Coal the go-ahead to bury hundreds of the tyres every year and the application is now with the NSW Department of Planning Industry and the Environment for a decision.

There is a twist in the controversial application, however, because the area Whitehaven Coal wants to turn into a de facto tyre landfill is owned by the Gomeroi traditional owners under a Native Title claim. Under the Environmental Planning and Assessment Regulation 2000, approval of the NSW Aboriginal Land Council is required for the modification because it is being proposed on Aboriginal owned land, which was previously the Travelling Stock Route.

Whitehaven Coal’s Modification application was lodged in September 2021 without the consent of the NSW Aboriginal Land Council.

However, two months on and Whitehaven Coal has now secured the necessary approval from the NSW Aboriginal Land Council after the Department of Planning wrote to Tony Dwyer, Group Manager Approvals and Environment politely reminding the company that “consent must be obtained from the NSWALC and provided to the Department before it can progress its assessment and determine the modification application”.

Allegations have been circulating in the region that Whitehaven attempted to threaten Gomeroi with loss of jobs if they do not sign off on the tyre landfilling. Certainly there is no benefit to the Gomeroi if the tyre burials are approved.

While technically termed “agency advice” and not “approval”, the NSW EPA’s approval of Whitehaven Coal’s application to bury off-the-road mining tyres for the life of the Maules Creek mine, would be subject only to a “review” every two years. The regulator’s submission to the planning process did not object to the application to landfill thousands of tyres in the Leard Forest precinct although it is understood Ms Mackey was  fully aware and well-briefed on the imminent tyre stewardship scheme.

The EPA’s refusal to rule out mass burial of off-the-road mining tyres, is also contradicting a Commonwealth initiative announced earlier in 2021 which advances the cause of recycling mining tyres. The Australian Government is providing a grant of $987,717 for the project through the National Product Stewardship Investment Fund.

Tyre Stewardship Australia has highlighted the role of the EPA to “consider details in their licences that make OTR tyre burial less attractive and steers behaviour towards more sustainable outcomes”.

Tyre Stewardship Australia went on to recommend “a further shift in legislation, such as a ban on whole tyres in landfill or more stringent licence conditions in some states, could further help to expedite solutions to current practices”.

This is a direct swipe at the EPA’s approach of condoning landfilling of the tyres without an end date, even when its objectives include setting mandatory targets for environmental improvement.

The actions of the EPA under Ms Mackey, who came to the role of CEO from her previous government appointment in Early Childhood Education at the Department of Education, appear to be in conflict with the EPA’s objectives under its founding legislation.

With serious errors of judgement and lack of insight into the agency’s objectives occurring regularly, Ms Mackey’s lack of suitability to lead the EPA is on show.