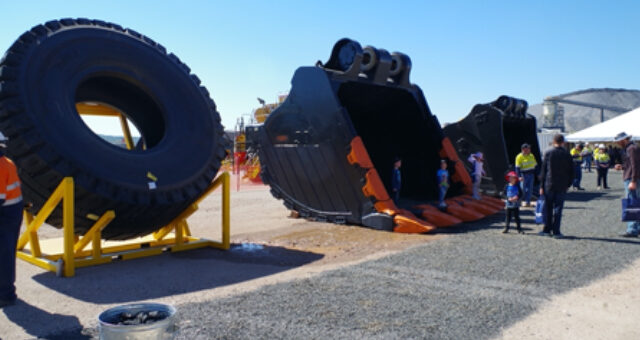 Following nearly a year of swirling allegations that Whitehaven Coal has been using its Maules Creek Coal Mine as an unofficial landfill to bury industrial tyres and waste oil, the Resource Assessments branch of the NSW Department of Planning, Industry and Environment has approved two of Whitehaven’s other Namoi mines to bury off-the-road (OTR) tyres from mining vehicles.

Feature Image: Example of the tyres being buried in their hundreds at Namoi Valley coal mines (Image supplied)

Maules Creek Coal Mine is once again at the centre, since claims emerged in 2020 that between 700-800 industrial tyres (some 2m plus in diameter) were being buried at the open cut. The allegations included reports that Whitehaven Coal was not only burying tyres from the mine itself, but transporting them from its other mines for burial there.

The allegations were coming from multiple sources in the Narrabri area, prompting community members to conduct aerial surveillance in June 2020 which revealed over 400 of the tyres positioned near the overburden, looking apparently ready for burial.

Whitehaven’s response to the claims was to inform the Maules Creek Community Consultative Committee that it was not burying the tyres at all, just “moving them around” the site. A further surveillance flight by community members in December 2020 once again found hundreds of end of life tyres poised near the coal stockpile.

Weekly satellite images show that the same week the tyres disappeared from the first site, the same volume of tyres appeared at the second site.

It is likely that the public’s surveillance of the mine averted the burial of some 400 tyres.

However, in the midst of growing public outrage over the sightings of hundreds of tyres awaiting burial at the Maules Creek coal face, NSW DPIE quietly published on its Major Projects website portal applications by two of Whitehaven’s minor mines, Tarrawonga and Werris Creek, to modify their approvals to allow burial of tyres.

The Department’s assertion that burial of thousands of tonnes of heavy plant waste tyres over a period of years will have “minor” environmental impact is not supported by evidence.

It is contrary to all known evidence of the behaviour of tyres buried over time, which is that they will not lead to a stable final landform. On the contrary, the buried tyres are known to be highly mobile, even when buried under substantial land mass. Literally no evidence has been provided by either Whitehaven or DPIE to support the claim that the mass tyre burials, numbers unknown, and only partially documented, would provide a sound base for the future rehabilitated landform.

With Tarrawonga MOD 9 and  Werris Creek MOD 4 approved, Maules Creek megamine has announced its intention to follow in quick succession with an application to bury tyres.

The Werris Creek Mod 4 Modification Report simply states: “The perception that whole tyres disposed in landfill ‘float’ upward and may surface overtime is not supported by experimental evidence and is considered unlikely due to the weight and rigidity of heavy vehicle tyres, as well as the depth of disposal.”

This is pure speculation unsubstantiated by any known evidence, experimental or otherwise, and flies in the face of all known landfill practices in Australia and abroad which are based on long experience that tyres do float to the surface over time.

Added to the problem are reports from mine workers that drums of waste oil are being buried inside the cavities of tyres prior to burial, allegedly a practice common at coal mines in the Hunter Valley where this has been observed to result in spontaneous combustion under overburden piles. Spontaneous combustion is a known problem of coal piles, but the occurrence under rock piles should be considered suspicious and investigated accordingly.

The Australian Tyre Recyclers Association (ATRA), a subsidiary of the Australian Council of Recyclers (ACOR) has weighed into the public discussion, with a media release on 22nd April disputing Whitehaven Coal’s claims that reprocessing of end of life tyres is not “feasible”. According to Robert Kelman, Executive Officer at ATRA:

“There are options for these used tyres and everyday mines around Australia are doing the right thing and ensuring this material is not dumped and instead reprocessed for secondary use… miners bring new tyres to site and those trucks often leave empty. Whitehaven could set up a program to ensure their stockpile of used tyres is backloaded and reduced over time. The material can then be transported to processing facilities.”

The NSW EPA’s Public Register shows that Whitehaven Coal applied for a change in its Environmental Protection Licence back in 2017, when community members started raising the issue of tyre landfilling at the mines via the Community Consultative Committees. However, permission to bury the tyres was never granted.

Numbers of tyres being disposed at Whitehaven Coal’s four Namoi Valley mines, Maules Creek, Tarrawonga, Rocglen and Werris Creek are sketchy, with the company applying to bury 350 tonnes of tyres over the remaining life of Tarrawonga (three years) and Werris Creek 68 heavy tyres annually. Reporting of tyre burials is inconsistent, with some being reported as tonnages, and some by number.

Publicly available Independent Annual Reviews of Maules Creek mine show that tyres were last disposed off-site in 2019, to the Narrabri Council Waste Management Facility, the same facility where Whitehaven was fined $120,000 by the NSW EPA for dumping hazardous waste in April 2019 resulting in an EPA Clean Up Notice that is still underway.

The allegations that Whitehaven Coal was bringing heavy duty tyres from its other mines in the region for burial at Maules Creek are indicative of an illegal landfill operation which is not included in the permitted use under the mine’s Project Approval.

Tarrawonga and Werris Creek mines also failed to observe DPIE’s Guidelines for the conduct of Community Consultative Committees which state under Section Five: Responsibilities of the Proponent – “The proponent should consult with the Committee before it lodges any applications with the Department and notify committee members when these applications are lodged.”

Michelin, Whitehaven Coal’s tyre supplier has made no comment. It was recently reported that Michelin has established its first tyre recycling plant under a joint venture (JV) with Swedish company Enviro to extract raw materials from earthmover tyres.

Meanwhile, 400 heavy duty OTRs are lying at Maules creek mine awaiting a sign-off from Resources Assessments, which will occur with no environmental impact assessment.