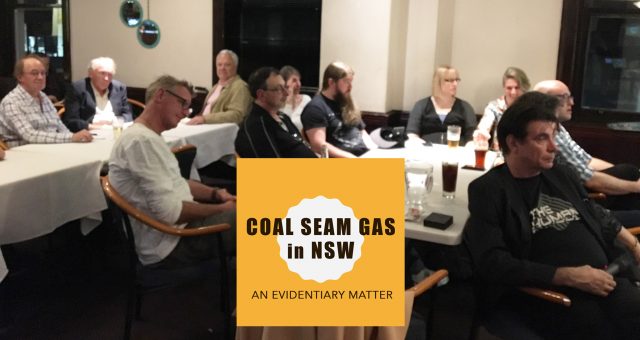 The inaction of the New South Wales Department of Health in relation to the introduction of widespread Coal Seam Gas (CSG) mining in the State was a special focus of the monthly Skeptics in the Pub meeting, where the rational-minded gathered to learn more about the controversial Santos Narrabri Gas Project.

Around 40 Sydney Skeptics heard, to the disbelief of some, that NSW Health had made a brief 1½ page submission on the 7,000 page Environmental Impact Assessment despite the industry being linked to a host of public health concerns since it’s introduction in Queensland.

The forum also considered the potential of groundwater and aquifer damage caused by the CSG industry.


Thanks to Dr. Geralyn McCarron and Mrs Shay Dougall for your work in informing part of this presentation.

Known for their rational and measured approach to life “Skepticism is a dynamic attitude to the world around us. It is not a dogmatic approach restricted by ‘accepted wisdom’, but a serious and sincere appraisal of claims of how the world works.” The Skeptics considered the burden of proof and whose responsibility it is to prove the unconventional gas industry is safe enough to proceed in NSW.

The starting point for the evening was the Australian Financial Review Editorial, 23rd June 2019, which suggested that the science falls in on the side of the CSG industry, writing:

“Encouraging indications that the Narrabri Gas Project will go ahead by the end of the year despite the obstacles stacked against it shows the right way to fix Australia’s energy crisis, Santos is spending $3 billion developing 850 coal seam gas wells in northwestern NSW, and using existing pipelines to send it into the State’s energy markets. The company has pushed the project against shrill protests by city greens and local farmers who ignore the science which does not suit them.”

The AFR has got it very wrong. The very people calling for more evidence, more monitoring and more disclosure about known risks, are those very landowners disparaged by the AFR and the thousands of others who objected to the State Significant Project.

“The ones seeking to suppress science and evidence are in the gas industry itself”, said speaker Anna Christie from NWPA, an advocacy group and the Leard Forest Research Node, a citizen science group based in Narrabri, NSW.

The question of onus of proof was discussed: Should Santos have to prove its processes are safe and not likely to lead to a repetition of the environmentally disastrous situation in Queensland, where groundwater throughout the region has been severely impacted in the relatively short period since the Surat gasfields and LNG plants commenced in 2008?

An example of suppression of science was provided – evidence that admissions to Darling Downs Hospital and Health Service could be traced back to the health impacts of living in an unconventional gasfield. Yet, NSW Health, refuses to support a health impact assessment of the industry as part of the assessment process for Narrabri Gas.

The irrationality of ignoring the Queensland experience when assessing CSG projects in NSW was not lost on the Skeptics.

Speaker Anna Christie, one of the organisers of the Coal Seam Gas and Public Health Conference in Narrabri (August 2018), also pointed out it is over two years since the Narrabri Gas Project was lodged for planning approval, and yet Santos still refuses to disclose details of the chemical composition of gas emissions as requested by the NSW Environmental Protection Authority. Santos also refuses to disclose hydrogeological information about underground fault lines that has been requested by the Water Expert Panel engaged by the Department of Planning.

Santos and the NSW Government also appear to refuse – or are unable – to fulfill some of the NSW Chief Scientist’s Recommendations from its 2014 report on the Coal Seam Gas Industry including Recommendation 9, which concerns the application of appropriate insurance environmental risk policy including project insurance, appropriate bonds for rehabilitation of sites, and a fund for long term environmental rehabilitation, remains unfulfilled.

A postscript to the Skeptics meeting, NSW Legislative Council Planning and Environment Portfolio Committee No. 7 meeting on Friday, 13th September 2019

On Friday 13th September, coal seam gas featured in two key Budget Estimates hearings. The ALP questioned Deputy Prime Minister John Barilaro, Leader of the NSW Nationals and Minister for Regional NSW during his appearance at the Industry and Regional NSW hearing. He claimed that he was not aware of the Chief Scientists recommendations. If this is the case then why do we bother having a Chief Scientist?

The second hearing, Portfolio Committee No. 7 – Planning and Environment provided that NSW EPA is responsible for implementing the Chief Scientists’ recommendations but, remarkably, in evidence to the Legislative Council on Friday, 13 September both the Chair and CEO of the NSW Environment Protection Authority, were not aware that the agency was so charged. In repeated exchanges with The Hon. Adam Searle MLC (NSW Labor) the EPA bosses floundered as they could not answer simple questions.

Clearly, CSG planning and environmental assessment is in chaos, even still, the Department of Planning hopes to fast-track the Public Hearing/Meeting with the Independent Planning Commission in Narrabri before Christmas. The NSW Gas Plan is available for review here.

It states “We have accepted all the Chief Scientist and Engineer’s recommendations.”

It’s clear that those dodging the science are not the objectors to the Narrabri CSG Project, but Santos itself, and NSW regulators along with it.