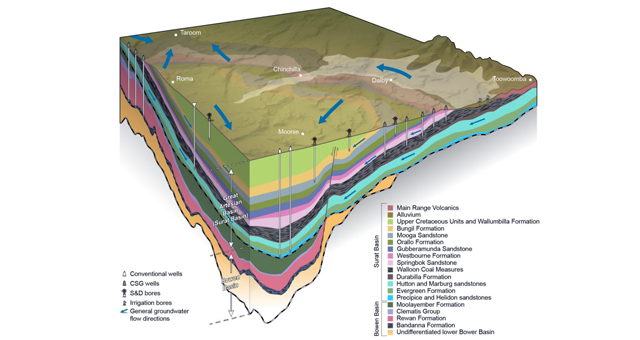 The meeting was convened to discuss the third (draft) Underground Water Impact Report (UWIR) since 2012 and was part of a broader group of meetings held across the region. (Submissions to this draft are due and close on 1 July 2019.)

The information and analysis of the data available regarding our underground water and the declared Surat Cumulative Management Area (SCMA) – in response to the Coal Seam Gas Industry impacts – has never been more detailed.  The Office of Groundwater Impact Assessment (OGIA) are to be congratulated on their work and the quality and style of presentation and materials.

The work undertaken by OGIA, the data collected, its analysis, output and presentation is a lesson that needs be taken seriously by all other agencies (such as GISERA and UQ) in relation to the impacts of the CSG industry. It should be the standard by which all data that is collated, analysed and disseminated in relation to the CSG industry on impacts generally, but particularly emissions, atmospheric contaminants and health impact assessment specifically.

Not withstanding this, it must be said that the fact that government has allowed this industry such unprecedented access and impacts while using adaptive management approaches instead of the precautionary principle is fraught with consequences we are yet to reap (as this very report demonstrates). See below.

Present at the Chinchilla meeting were a number of representatives from the enforcement agencies of Department of Natural Resources, Mines and Energy (DNRME) and Department of Environment and Science (DES) to answer questions that landholders had regarding the application of the research from the OGIA to the permitting and decision making they undertake in relation to the industry.

The presentation detailed the following facts about our underground water:

Shale exploration has just been announced for the Western Downs.

Will the decision to permit this activity benefit from the OGIA and UWIR in the permitting and decision making in a way that CSG did not? (Answer – yes)

Attendees asked questions of the DES staff present to explain the interface between the UWIR and the decisions made regarding the Linc contamination and permits for CSG companies in the area.

Specifically issues such as:

The answer to these questions by DES were that the information being requested would most probably be available through a Right to Information Request.

The DES representative was requested to attend a meeting with landholders to assist in formatting an effective application to target the information requested. This will be considered.

Landholder feedback on the UWIR 2019 closes on 7 July.