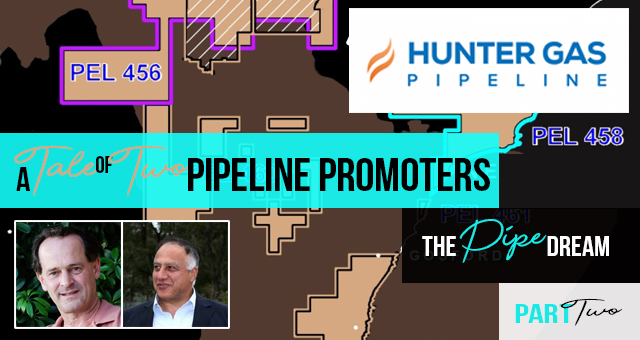 In Part One we detailed the history behind the formation of Macquarie Energy and Apollo Gas and the emergence of pipeline promoters Duncan Hardie and Garbis Simonian.

In 2004, the NSW Government abandoned a plan to build a Gas Transmission Pipeline from Wallumbilla, QLD to Newcastle, to bring gas from QLD to NSW. This was following research undertaken under the portfolios of Craig Knowles (Minister for Infrastructure and Planning and Minister for Natural Resources, 2003-2005).

However in July 2005, The Sydney Morning Herald ran a story about three businessmen from Hunter Energy Pty Ltd proposing their own gas supply pipeline plan spanning hundreds of kilometres. They already had a development consent to build an offtake gas pipeline from the Sydney to Newcastle Gas Transmission Pipeline to the Kurri Kurri and Rutherford industrial areas. Their spokesperson Garbis Simonian went so far as to claim gas could be 20%, or more, cheaper via the new Queensland to Hunter Gas Transmission Pipeline they were now proposing.

Potential sources of gas for the proposed pipeline were given as not only Queensland (the Surat Basin) but also other areas in NSW, where Petroleum Exploration Licences already existed and others were being issued, such as the Eastern Star Gas PEL 238 near Narrabri, the same PEL as the current Santos Narrabri Gas Project.

When Hunter Energy first proposed the pipeline in 2005, the proponents were most insistent that this pipeline needed to be both approved and built in a hurry to forestall competition from other companies, such as the “dominant” AGL, to ensure that their pipeline company could supply plentiful, cheaper gas for “the benefit” of NSW.

Help was at hand to achieve this grand vision. In September 2006, Ian Macdonald, now Minister for Primary Industries as well as Minerals and Forest Resources ensured  that the one-year old Part 3A legislation was also applied to the Pipelines Act of 1967.

Part 3A legislation, encouraged and championed by a body called Urban Taskforce, had been previously introduced for major land developments in NSW in 2005 by then  Minister for Infrastructure and Planning Craig Knowles.

Urban Taskforce was formed in 1999. Its founding Chairman was the same Duncan Hardie of Hardie Holdings introduced to readers in Part 1 of this series of articles, a high-profile property and fossil fuel speculator from New Zealand.  A founding director was David Tanevski  of KWC Capital Partners and Director of Goodman Hardie Industrial, a financing company partially owned by Hardie. Urban Taskforce was comprised mainly of both land developers and industry financiers. In 2007 the NSW Greens Party gave the Taskforce the dubious honour of a “Bad Developer” award for “most insidious industry lobbying effort” for its campaign to have the planning laws undermined.

The purpose of Part 3A legislation was, amongst other things, to streamline, simplify and speed up development applications for NSW State Planning designated major land development projects in NSW, reduce local council responsibility, reduce some environmental burdens and save developers money at the same time.

Now Part 3A legislation was to be applied to high pressure Gas Transmission Pipelines.

By October 2006, the proponent Hunter Energy Pty Ltd (the now named Queensland Hunter Gas Pipeline) had reapplied for their project under the new Part 3A legislation as a Major Project. It already had a route selected and the company began compiling all the necessary studies and reports required under the new streamlined legislation.

Purportedly, this was for the benefit of the people of NSW, cheaper gas, cleaner, greener power generation, jobs etc and also to encourage the expansion of CSG exploration and production in NSW along the entire route of their proposed gas pipeline.

By now there were four proponents, under the new company name Hunter Gas Pipeline Pty Ltd, to privately fund the project and operate it themselves once constructed. This, they claimed, was to ensure lower delivered gas prices. How philanthropic! Lower gas prices is a claim we continue to hear today, from both Mr Simonian and Santos.

Hilton Grugeon (Hunter Land): Director and shareholder and well-known Hunter/Newcastle regional land developer of both residential estates and industrial parks as well as highly active political donor (later to be found by ICAC to have made illegal donations after property developers’ donations were banned).

Ross Skerman (Resource and Land Management Services, a Queensland company): Director and shareholder of RLMS, which would select and design the final pipeline route, meet with landowners, negotiate future easement agreements and compensation packages, co-ordinate the entire application and approvals requirements, both Federally and with QLD and NSW, as well as compile the EIS.

These were the four entrepreneurial individuals who were proposing to successfully achieve what the NSW Government and two other gas companies in 2004 had concluded to be a financially unviable long-term project.

The 200m wide pipeline corridor route these four men selected between 2005-2006 and presented to NSW Planning in early 2007 also ran through Apollo’s most promising PELs (458, 456, 464 and 459). It also ran close to or through many other established or emerging exploration company PELs. It continued on through the Surat Basin, Queensland to the strategically significant Wallumbilla Pipeline Hub.

Over the next 25 months, Hunter Gas Pipeline, with Ross Skerman’s RLMS coordination, contracted out multiple desktop studies, many based on data that has been found in at least one section of the route, to have been up to 13 years out of date. Based on that, an unknown amount of data used is now a quarter of a century out of date. An Environmental Impact Study, including desktop assessment purportedly fulfilling the NSW planning laws was undertaken.

RLMS introduced the concept of “Adaptive Management” as outlined in the Director-General’s Environmental Assessment Report – February 2009, for the gas pipeline construction in NSW and for those many areas neither RLMS nor Hunter Gas Pipeline could provide definite plans/strategies for to ensure that their project would have the best chance of gaining approval without any further environmental impact studies being completed.

In January 2009, a major problem occurred for Hunter Gas Pipeline’s “almost approved” project. The Queensland Gas Company (which was partnered with Rawson Resources Ltd, another company Duncan Hardie had a shareholding in) unexpectedly pulled out of the deal. QGC was to finance and build/operate the power station and was to supply the gas from Queensland. QHGP was expecting to be its major foundational gas user customer via building and operating a proposed 400-600MW gas-fired power station near Liddell.

In February 2009, the Queensland Hunter Gas Pipeline was approved but had NO gas source and NO large, contracted, foundational gas customer.

In February-March 2009, despite this major setback, the proponents remained upbeat about sourcing gas and obtaining other contracts from large gas using customers and said they would be commencing the build within a year. Hunter Gas Pipeline even sent an initial, post-approval letter to the affected landowners to that effect, claiming to have applied for the Authority to Survey the final easement. No such survey ever eventuated.

By December 2009, just as Apollo Gas (ex-Macquarie Energy Pty Ltd) was floated on Australian Stock Exchange, QHGP’s second letter to affected landowners conveyed a far less positive message. It cited many factors for the inability to obtain finance for the project, placing blame on both NSW and Federal governments, as well as the Global Financial Crisis (GFC), suggesting further pre-build activities were on hold and as a result, the construction process would be delayed a further 12 months. In April 2011 affected landowners received their third letter, signed by Garbis Simonian. This letter again placed blame for not obtaining the necessary finance on the Federal and NSW governments, the after-effects of the GFC and incorporated “holding pattern” messaging.

The project remained in stasis on the NSW Planning’s Major Projects portal for the next 8 years and Hunter Gas Pipeline Pty Ltd ceased directly communicating with affected landowners.

During this time, Santos bought Eastern Star Gas and confirmed its intention to develop the Narrabri coal seam gas project with APA Group as its chosen pipeline contractor hoping to construct the Western Slopes Gas Pipeline from Narrabri to market through Coonamble and Warren.

Hunter Gas Pipeline Pty Ltd land holder consultation lapsed during the following years, with countless changes in land ownership and people along the pipeline route unaware that the pipeline was approved.

Part 3 of this tale will focus on the sale of Apollo Gas and the divestment of Duncan Hardie leaving Garbis Simonian to promote the pipeline to nowhere.