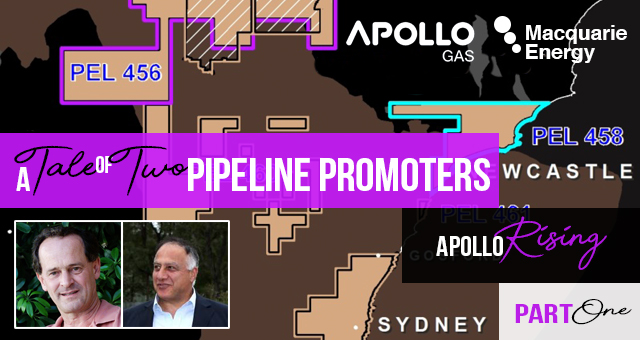 We present to you a three part story on the long history behind the Queensland Hunter Gas Pipeline (QHGP), an 833km, 600mm wide gas transmission pipeline, initially capable of transporting 85 petajoules increasing to 120+ petajoules, proposed to go from Newcastle, NSW to Wallumbilla, Queensland and affecting approximately 500 landowners over 1,250 plus land parcels.

By February 2009, Macquarie Energy had accumulated seven Petroleum Exploration Licences (PELs) and commenced coal seam gas (CSG) exploration on all of them, either with their farm-in partners (Santos and Arrow Energy), or on their own. Farm-in is a common way of sharing the cost of exploration between more than one company.

By May 2008, Rawson Resources Ltd had also become the Technical Operator for Macquarie Energy’s exploration activities in NSW, in a Joint Venture (JV) partnership.

The Macquarie Energy Petroleum Exploration Licences were located from the City of Sydney (PEL 463), to Catherine Hill Bay (PEL 461), and the Hexham/Fullerton Cove/Tomago area (PEL 458 ) and heading north, from the Mid Hunter to Narrabri (PELs 460,456, 464 and 459).

The PELs covered 23,600km2 of the Sydney-Gunnedah Basin and incorporated two geothermal licences within 3,500km2, overlaying the Murrurundi Trough.

New Zealander Duncan Hardie was not just a land developer. In 2005 he already had a 30-year history of experience, speculation and exploration in the fossil fuel industry including gas interests in the Surat Basin, Queensland.

Hardie also held a shareholding in Rawson Resources Ltd (QLD) as well as being in a JV with them via Hardie Energy – Surat Basin. He became both a Director and Chairman from 2011 until 2012. A few years later he would take over Rawson by accumulating a majority shareholding.

On the 5th December 2009, following the approval of the QHGP (having announced a transportation and access Memorandum of Understanding) which traversed four of Apollo’s PELs, Macquarie Energy was listed on the ASX as Apollo Gas Limited.

Apollo Gas raised $8m in its first share offering. The share price in April 2010 reached a heady 74c, with Apollo, at the time, holding a cash balance of $13 million.

In April 2010 Duncan Hardie resigned as a Director of Apollo Gas, retaining a major shareholding in the company.

In June 2010 Ian Macdonald, Minister of Mineral and Forest Resources and State and Regional Development (and Major Events), commissioned a $1.4m seismic study of NSW’s underground resources: CSG and Geothermal. This study was immediately promoted via an ASX media release by Apollo Gas. The seismic study was anticipated to provide data from PEL 456 where Apollo Gas, which was in a farm-in partnership with Santos, was undertaking CSG exploration.

In September 2010, the majority of Apollo Gas shareholders (Duncan Hardie alone held 40% of the shareholding) accepted a proposition from Dart Energy to purchase Apollo Gas Limited and its PEL titles (except PEL 456). Dart Energy was created as a “spin-off” from Arrow Energy, Apollo’s farm-in partner in PELs 458 and 464)

The deal was described in one news report:

Apollo Gas is just one part of the Hunter to Queensland pipeline tale. Enter Hunter Energy Pty Ltd, and the part of the tale that becomes “the worst of ideas”.

In Part 2 of The Tale of Two Pipeline Promoters we detail how Hunter Energy Pty Ltd was formed and the subsequent plan to resurrect an unfeasible pipeline idea that the NSW Government had already rejected.