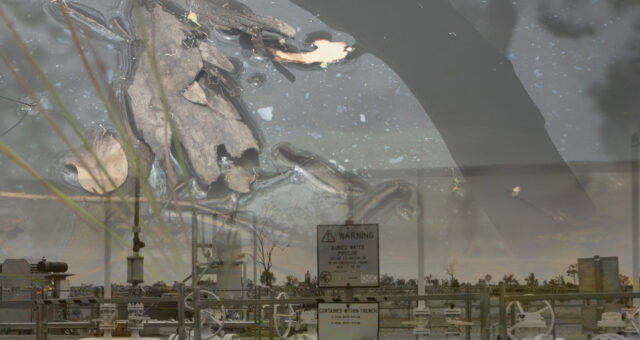 We must question the human rights abuses that are happening on the Western Darling Downs in south-west Queensland. Is this the kind of future in store for north-west NSW? Shadow places are everywhere but rarely made visible. NWPA present a photo essay of a place that has surely been consumed by shadow.

A monster well head marks the festive season in the gas fields. This sits on a well pad in the Shell-owned Ruby Jo gasfield.  Danger tags blow in the wind like decorations on a Christmas tree. A glimpse of what’s to come for those in the path of newly announced projects like the Santos’ Narrabri Gas Project, Arrow Energy Surat Gas Project, the Senex Project Atlas and the Armour Energy Surat projects.

Empty shacks, caravans and half burnt out houses litter the gas fields, a memory of the lives and communities dismantled. The hopeful road names like Happiness, Fortune, Lucky and Golden Glow Rd are the only remaining memory of a better time. It’s fair to say that the people in the Tara Estates have become collateral damage to an export industry. Abandoned by fellow Australians. It’s just too hard to fight the juggernaut.

A necropolis of old drill pipes, hidden in bushland, away from the gaze of local communities. Behind private property fencing lies the truth of an industry that takes more than it gives back. Piles of rubbish and old equipment decay on the sunburnt landscape.

A table drain on a residential road. The milky, polluted water is topped with a stagnant chemical froth. Could this be dumped drilling waste?

Further into the bush, the pooled water is black with rainbow oil slicks, an unexpected underworld scene. Beyond here lie gas wells and infrastructure. Where does this oily and hypoxic looking water come from? Who investigates? Poisoned ponds where there is no life. A dead zone. Regulators are nowhere to be seen down at Ground Zero.

A supply yard for hundreds of new well heads, pumps and pipes ready to be unleashed among the population of the Western Darling Downs. Metallic machines designed to suck the life out of the land around them for offshore profit look like they are directly from a dystopic B grade sci-fi flick.

Soil crusted with a chemical layer. Locals have been photographing scenes like this for years. This is similar to dumping reported to the NSW Environment Protection Authority at Cains Crossing Road in the Pilliga. The same practices employed in Queensland will become normal in NSW if the industry is allowed to proceed.

A deafening silence shrouds the forest. No wildlife to be seen or heard. Only the odd crow, slow to move off the road in front of oncoming vehicles. Our eyes burn, one of our team experiences the slow creep of a dull headache. We’ve only been here a few hours. How can you live here?

A gas power station. One of many in the region. Gas power stations are touted as the key to a ‘low emissions’ future, despite mounting evidence that gas emissions are equal or worse than coal.

The industry over-estimated and over-sold reserves. They say we are running out of gas and to make sure their export quotas are filled and the export trains at Curtis Island continue to operate at maximum profit capacity they cite domestic gas shortfall. The companies look now to the more expensive untapped gas to expand. They look to private land, to the farms and the larger holdings. Their voracious appetite for land to drill is unsated and their human rights abuses continue unchecked.