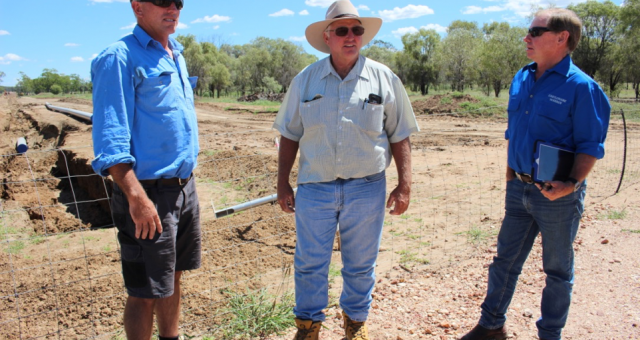 Since November, communities from Pilliga to Tottenham have been alive with controversy over a proposal for a high pressure pipeline to carry coal seam gas from Santos’ Narrabri Gas Project into the east coast gas network.

Farmers on the pipeline route have just returned from a visit to the gasfields of the Western Downs and Maranoa, Queensland, where they toured Chinchilla, Miles, Yuleba, Injune and Roma to view infrastructure and meet with locals of many years’ experience with the CSG industry.

“We visited someone who is currently receiving an APA gas pipeline at Reedy Creek to Wallumbilla. The price per kilometre offered for easement settlement is considerably more up there, $65,000 per kilometre,” said one of the group, Simon Fagan of Leeholme, Coonamble. “In Tottenham, APA is offering only $15,000 per kilometre, a huge discrepancy in compensation.”

“The gas industry’s claims are pretty false that there is not much impact,” said Tony Smith of Broadwater, Warren. “The impact is as much social as it is environmental. If you look at the town of Tara, it didn’t seem to gain. The destruction of Miles is terrible. Greed got in the way, and now there are all those empty houses. The community is now smaller than when the gasfields first started.”

“The scale of the gasfields is probably 20 times bigger than I imagined,” said Mr Smith. “I didn’t realise a gas compressor station is the size of a city block, not a container. The sheer size of them is staggering, and there are going to be 5 of them on the Narrabri to Moomba pipeline, if not more. The noise will be extremely disturbing to people living for kilometres around a compressor station.”

“If you are close to a gasfield, you can almost guarantee that something is going to happen – the bores are certainly going to drop,” said Mr Smith. “From the examples we saw, the drawdown predictions were all underestimated. The coal seam gas companies are going to damage water, the evidence is clear to see. So to suggest putting in another bore as a solution, industry calls it ‘make good’, that’s all very well in the short term, but what happens in the future? What happens to my children, our inter-generational equity.”

“The confidentiality agreements are wrong. They shouldn’t be able to hide if something goes wrong,” said Mr Fagan. “I don’t think it is right that you’re not allowed to talk about your business, it puts you under added stress.”

“The long-term effect on the Great Artesian Basin (GAB)  is very concerning. CSG has become the biggest GAB water user in Queensland and now draws more water than agriculture, and the CSG industry is hoping to expand. If the GAB is contaminated or destroyed, it cannot be repaired yet it appears both the extractive industry and the government are prepared to push the GAB supply to its limits, or beyond,” said Mr Fagan.

“Of all the concerns about this industry – and there are just so many of them – water comes first, second and third in importance,” said Tony Van Lubeck, of Castlemaine, Warren.

“We are convinced that co-existence between coal seam gas and agriculture is not possible,” said Mr Smith.