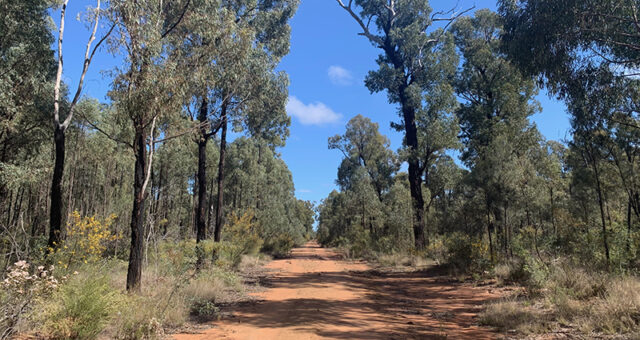 Santos, the South Australian gas company, has lodged a Scoping Report for a new methane gas pipeline to connect its proposed Narrabri Gas Project (approved in 2020, but not yet commenced) with the yet-to-be built Hunter to Queensland Gas Pipeline some 60 km to the south east at the small town of Baan Baa. The 50-55 cm diameter steel pipeline will be approximately 55km in length and result in clearing an estimated 120 Ha of native Pilliga Forest vegetation.

Santos has lodged the flagrantly misleading Scoping Report claiming there are no cumulative impacts associated with the proposed lateral pipeline in respect of atmospheric emissions, visual disturbance, biodiversity, and bushfire risks. This is despite several major fossil fuel industrial projects either already underway in the region, or in planning:

Narrabri Underground coal mine (Whitehaven Coal) – already named as the region’s no.1 methane emitter and a major emitter of CO2 through its raw venting of longwall gases (Narrabri underground mine emits 12,960 kg/day of methane alone, equivalent to twice the total Narrabri herd of cattle). This underground mine has an astonishing above-ground footprint due to its primitive degassing activities where no gas is piped for beneficial use.

APPROVED BUT NOT COMMENCED

Santos disingenuously states it “may coincide” with its other projects, when in reality they are intrinsically connected.

Narrabri Gas Project – according to the Scoping Report for the Narrabri Lateral Pipeline, the 850 gas wells already approved “may coincide”, but there is no need for a cumulative assessment and no call for a detailed assessment in the EIS.  Santos is also defending action by Australian Centre for Corporate Accountability (ACCR) who claim the company breached environmental disclosure laws by falsifying claims it can offset emissions and the Gomeroi people have appealed against the Native Title Tribunal decision to dispossess them of the Traditional Lands.

Hunter to Narrabri Gas Pipeline – with an Authority to Survey granted to Santos, the concept of the Narrabri Lateral Pipeline not having cumulative impacts with its related pipeline is a false and misleading claim.

Inland Rail – a section of this new rail project is slated to go greenfield through the Pilliga Forest to the west of this proposed new pipeline increasing cumulative impact in the forest.

The Scoping Report is supposed to provide the NSW Department of Planning the range of issues that Santos would be required to address in its Environmental Impact Assessment, however, it  contains misinformation and lacks critical information. According to Santos, there would be NO cumulative impacts with ANY of the above-named projects, and NO cumulative impacts in respect of atmospheric emissions, gases, biodiversity or bushfire risk. The Scoping Report fails to give any detail on Compressor Stations and the associated inbuilt venting infrastructure that would be required.

What are cumulative impacts?

According to a newly released Cumulative Impact Assessment Guidelines for State Significant Projects (October 2022), this is the definition of a “cumulative impact”:

“Cumulative impacts are a result of incremental, sustained and combined effects of human action and natural variations over time and can be both positive and negative. They can be caused by the compounding effects of a single project or multiple projects in an area, and by the accumulation of effects from past, current and future activities as they arise.”

Santos’ claims that there are no cumulative impacts on atmospheric emissions, gases (such as from high point vents and low point drains), biodiversity or bushfire risk are plainly false and misleading. This assertion cannot be left unchallenged.

While the Scoping Report is not subject to public exhibition like the environmental impact statement, nevertheless it is important for this fallacious document to be exposed early, and before the Secretary’s Environmental Assessment Requirements are established.

“The guidelines also seek to encourage greater collaboration between the proponent of the project and any other people or groups that are interested in seeking to minimise the cumulative impacts of development in the wider area over time, including government agencies, councils, the proponents of other relevant projects and the community.”

Despite many examples showing that gas infrastructure routinely leaks, in fact, is purposefully designed to emit gases, Santos has the temerity to claim in this Scoping Report that atmospheric emissions would not warrant a detailed environmental assessment. The truth is, if Santos wanted to they could operate their equipment in a way that was less damaging but it is expensive and eats into profits.

Faulty valves, broken vents and a myriad of technical problems occurring in the field have already proven to be standard operational features in Santos gas projects. A few examples to date include multiple vents at Santos’ Pilliga exploration field which NWPA reported to the NSW Environment Protection Authority that were subsequently repaired, but had been leaking for an unknown duration of time.

Closed-in gas well, Bohena 3, discovered to be leaking at the rate of 210 ppm, shut-in well at Bibblewindi 14 has a vent on site and in Santos’ Fairview gasfield in Queensland, another gas well reported to the Dept of Environment and Science as leaking by NWPA in 2018 and subsequently shut-in.


Toolachee pipeline explosion in 2019, caused by unsafe Santos work practices during which a hammer fell from a worker at height causing a life-threatening pipeline explosion resulting in closure of the Strzelecki Highway is another example of a cost cutting cheap operation.