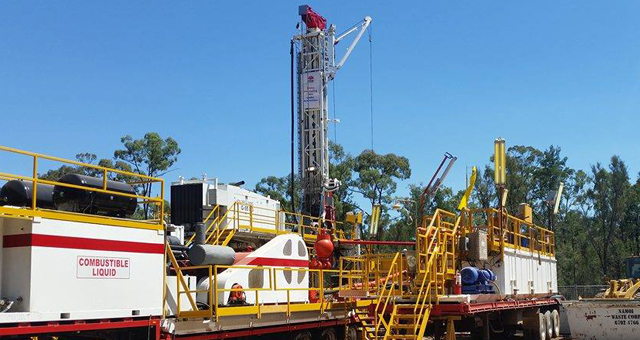 Threats of gasification of groundwater and resulting contamination, as well as groundwater depletion, are foremost in the minds of objectors to Santos’ Narrabri 850+ coal seam gas well (CSG) project. In theory, baseline monitoring can help prove if gas mining changes the existing groundwater conditions and if a contamination incident can be attributed to industrial activities. Baseline monitoring is a sensible and necessary activity.

The fact is, the experience in Queensland has seen a dramatic drop in groundwater levels since the coal seam gas industry started  in Queensland in 2008 with documented cases of bore water contaminated and no longer usable for stock and domestic purposes. As of late 2018 there were 6,800 coal seam gas wells in Queensland and the industry is still growing, the existing and planned CSG production area has increased by 17% since 2016 with projection of about 21,000 CSG wells. So far in NSW dozens of wells have been drilled but production of CSG is limited to the Pilliga and Camden areas.

NSW Water is conducting a charade of baseline monitoring of groundwater where the gas industry (Santos) wants to mine in the Pilliga forest. The area is the southern recharge zone of the Great Artesian Basin (GAB), it sits on top of the most easterly part of the GAB and is also a major aquifer upon which a vast swathe of NSW agriculture is reliant.

Water monitoring data needs to be collected and thoroughly examined in a scientific manner before the industry proceeds with any further drilling activity otherwise baselines won’t be baselines.

A government baseline water monitoring bore (WMB) in the Pilliga Forest in close proximity to four hydraulically fractured (fracked) gas wells has returned results showing methane (CH4) approaching and exceeding the lower explosive limit for a duration on 24th May, 2018 along with other concerning parameters such as hydrogen sulphide and benzene. A report commissioned by the Crown Lands and Water Division, NSW Department of Industry, details these conditions in a taxpayer-funded bore that was installed at Plumb Rd in early 2017 to inform a baseline.

Can Plumb Road be considered a baseline?

The 2017 Plumb Rd methane readings between 10,000ug/l to 27,000ug/l (micrograms per litre) approach the warning level for domestic use. Imagine flammable amounts of methane in a confined space such as a shower?

Benzene was tested at 12ug/l (which is .012 mg/l) – the Australian Drinking Water Guidelines suggest that: Based on health considerations the concentration of benzene in drinking water should not exceed 0.001 mg/L.  Further to this:

benzene can occur naturally in groundwater as a result of proximity to, or contact with, coal seams, petroleum and gas deposits and shales. It may be mobilised by extraction activities.”

What if these aquifers were the groundwater source for your stock and domestic bore or your town water supply? Are they being infiltrated by upward leaking methane and other explosive gases such as hydrogen sulphide? The source of these gases is most likely to be the coal seams below the GAB (note this study was done to the north of the Santos coal seam gas operations but covers the Wilga Park area) in the Gunnedah Oxley Basin (GOB) and the conduit is most likely the known faults, fractures or the penetrating gas wells themselves that allow a connection between the two basins.

Hydrogen Sulphide is poisonous, corrosive, and flammable. It comes from sulphate reducing bacteria (SRB) located in a shallower source fed by the introduced sulphates from drilling fluid/aquifer interchange and other organic base drilling additives such as sawdust and bentonite clay which are used to manage the drill fluid/aquifer interchange when a well is drilled. Barium was also detected (is the formation naturally high in barium or is it contaminated by nearby drilling conducted with barite which is a drilling additive?). Also detected was Phenol 3- & 4-Methylphenol, a widely occurring natural and manufactured group of aromatic organic compounds.

No testing data is available for bacteria such as SRB, a serious omission as this has been continually highlighted by community for many years. SRBs have been blamed for causing microbiologically-influenced corrosion in oil and gas wells.

The gas industry in Australia is not keen for the average person to know about well integrity failure judging by the speed with which an article on expandable sleeves to isolate bacterial corrosion in coal seam gas wells was removed from the internet. See here to read the article and note this quote:

Microbiologically-influenced corrosion seems to be systemic in the region [Surat], and other operators might encounter similar issues in their CSG wells.”

Taxpayers would be right to ask why bother doing testing if you are not going to accompany the results with an analysis/discussion at the very least. The report completed by StreamlineHYDRO (Plumb Road – Groundwater Monitoring Equipment Installation Report No. 2018072001-RPT-001) falls short in this regard.

Plumb Rd WMB sits between two fracked wells which are roughly 1km apart and other fracked CSG wells directly to the south east. All of these sites are still being rehabilitated above ground many years after being drilled. Detailed in the Well Completion Report for Bohena 4 is a troubled drilling process involving gas kicks, lost circulation, burnt gas (unexplained in the report) and a downhole fire (see table below).

The Bohena 4 well was then set up in 2004 to be the first Eastern Star Gas well drilled horizontal in-seam, they drilled horizontally to the south in the Bohena Seam for roughly 800m reaching a total depth of 1622m before fracking and setting up as a production well.

In summary Plumb Rd is a poor location choice for a WMB whose primary purpose is to take ‘baseline’ measurements that show groundwater quality. There is some concerning data already collected that needs further investigation by government – it does appears that Plumb Rd may be useful for investigating what has occurred in the past although it is not clear that these investigations are actually occurring.

Serious and urgent questions should be asked by the NSW Government of Santos, has aquifer connectivity already occurred in the Pilliga?

Part 2 of this investigation by NWPA has been published highlighting further drilling, NSW Government commitments and peer-reviewed studies of the Gunnedah-Oxley Basin.

All government documents quoted in this article can be accessed here

All information in this article is publicly available.