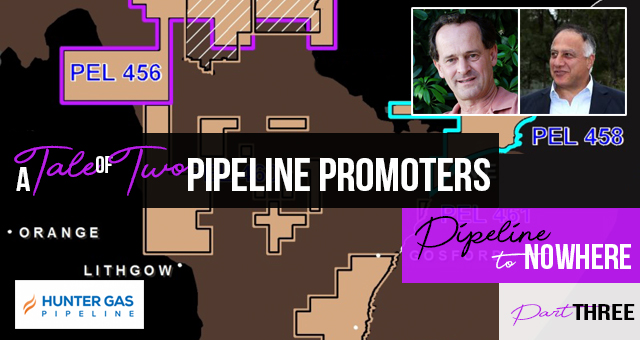 In Parts One and Two, we brought you the story of businessmen Duncan Hardie, Garbis Simonian and others along with the genesis of the Hunter Gas Pipeline company in 2005 and the machinations that have taken place since then to establish a 600mm diameter cross border gas transmission pipeline connecting Queensland’s Wallumbilla Gas Hub to Newcastle.

Duncan Hardie was an influential serial land and fossil fuel speculator from New Zealand, and founding Chairman of the NSW Urban Taskforce, who had claimed that he and three other proponents would finance the build and operate the pipeline but the project never progressed past the promises of benefits to NSW following the initial 2009 approval.

He made a significant profit from both part ownership of Apollo Gas and a Gas Transmission Pipeline proposal that had an approved conceptual Development Approval (Hunter Gas Pipeline Pty Ltd).

Due to the complementary nature of the Apollo and Hunter Gas Pipeline Pty Ltd activities and the (perceived) joint assets. These “joint, complementary assets” were used to promote Apollo Gas to additional shareholders in 2009 and ultimately to a larger, third party purchaser in 2011.

An eerily similar move was made by the same Duncan Hardie who, in March 2010, walked away from the Hunter Economic Zone project, a 3,200-hectare business development and conservation buffer near Kurri Kurri. This was also approved by the Minister of Planning in 2009, following it being assessed by the PAC due to concerns about political donations made over an 11 year period (NSW Government News Release – Minister for Planning 15/5/09), placing it into the hands of receivers, claiming inability to repay his financiers.

This occurred once he realised the Hunter Economic Zone was no longer viable in the absence of a co-dependent project, an international container terminal to be located at the Port of Newcastle that had been proposed by sometime business partners and fellow land developers Hilton Grugeon and Jeff McCloy.

In 2012 Duncan Hardie sued the NSW Government for $393 million in damages, claiming they had reneged on a deal to rezone his Hunter region landholdings for five housing developments and although they were subsequently approved, Hardie claimed he had suffered “substantial personal losses” and faced the possibility of loans worth $16 million being called in by his bankers.

The other businessman, Garbis Simonian, used to be a part owner of Macquarie Energy – a gas exploration company. He had approval for a gas transmission pipeline project that never began construction. No major financial investor or partnership for the entire route had ever been confirmed. No confirmed gas supply or any major gas customer contract had been announced (although his own company, Weston Aluminium may sign up for 10 petajoules for 10 years).

His pipedream has also accumulated a negative financial return for this 11-year-old proposed project. In 2015, under oath to the Australian Competition and Consumer Commission, Mr Simonian estimated this negative “on the books” amount, for “front end engineering” to be approximately $16 million.

It is not clear if Santos will send any of its gas via the Queensland Hunter Gas Pipeline even if the Narrabri Gas Project is approved by the IPC in September 2020. On May 15, 2017 the company stated “Santos is not working with QHGP” but then in 2020 during the Narrabri Gas Project public hearing Tracey Winters of Santos stated that they were investigating other options including HGP along with the Western Slopes Pipeline to get their gas to market.

Just recently, Mr Simonian has been quoted in the media suggesting that his small, private, company’s extremely ambitious $1.2 billion pipeline project may be the recipient of Australian taxpayer-funded financial support as part of the Covid gas-fired recovery.

If that support is guaranteed it will be used by Mr Simonian to enhance his ability to attract investors, or other forms of funding to enable the construction of the pipeline to commence.

Theoretically this pipeline may be sold to a third party for both construction and operation once it obtains its Pipeline Licence in NSW. Such a sale could recoup Mr Simonian and his fellow shareholders not only their outlays to date but an extremely healthy profit. Whilst Mr Simonian may be feeling 90% certain that his interrupted and problematic pipeline project will finally be built, or at least achieve the goal of obtaining a NSW Pipeline Licence, there are hundreds of landowners who will also be wondering if they will now be faced with having a negatively impactful pipeline, within a 30m wide easement within a 200m corridor imposed on them by Hunter Gas Pipeline, the NSW Government, backed by the Federal Government at the behest of the gas industry.

Then there are the title owners of the numerous PELs in NSW, including PEL 456 owned by Hunter Gas Pty Ltd ABN: 95113972473, previously named Apollo Gas and prior to that Macquarie Energy. Companies with an interest in PELs anywhere along the Hunter Gas Pipeline would be amongst those supporting any means necessary to ensure the Hunter Gas Pipeline is built. Comet Ridge and Carbon Minerals have already indicated Works Programs to keep their expired PELs alive.

Garbis clearly does not understand that exactly the same type of resistance that surrounds Narrabri and that also sent APA slinking away from the proposed Western Slopes Pipeline at Coonamble, now extends along the QHGP route.

The communities along the proposed route of the pipeline have long endured this protracted and unfeasible project and are hoping that the IPC rejects the Narrabri Gas Project and puts paid to the pipeline for good.

Many are not only concerned about the impacts of involuntarily “hosting” a gas transmission pipeline and the very real impacts to their properties, but of the spectre of PELs overshadowing their region along the pipeline route.

Community action groups have been formed along the proposed pipeline route, such as Concerned Residents Against the Pipeline (CRAP) based in the Liverpool Plains. The groups are allied together to defeat Garbis Simonian’s dreams. One group after another between Singleton and Quirindi is conducting COVID-19 safe meetings to galvanise opposition to the pipeline and Garbis Simonian has become engulfed in a public relations war.

In his campaign to attain social acceptance Simonian has engaged the services of Barbara Campany, a well known community engagement specialist who calls herself an outrage management consultant. Ms Campany is previously known for her role in attempting to defuse public outrage over Orica’s hexachlorobenzene spill above the Botany aquifer.

The Hunter Gas Pipeline is seen as the harbinger of a re-energised NSW coal seam gas exploration and gas-based manufacturing industry, standing in line and hoping to be the recipient of the National Covid Commissions’ largesse in the push for a gas-fired economic recovery.

If the Narrabri Gas Project is rejected by the NSW Independent Planning Commission, Mr Simonian may regret not having “walked away” with his dignity still intact in 2011, or at the very latest in 2018, and not having added even more financial burden on his fellow shareholders and the company’s balance sheet. Even if the Independent Planning Commission approves the Narrabri Gas Project, Simonian still has a battle on his hands with arch enemy APA indicating it proposes to lodge its Environmental Impact Assessment for an alternative pipeline route the Western Slopes pipeline towards Moomba in early 2021.