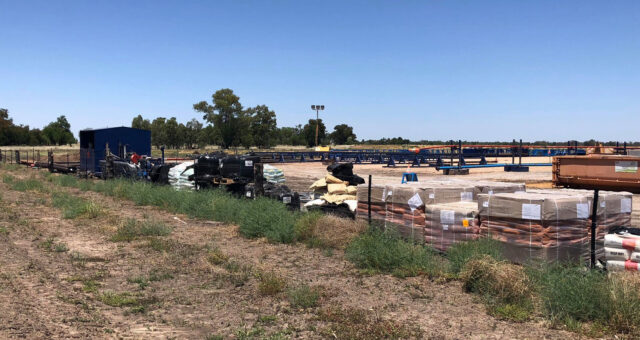 An application by QGC and Shell to use BTEX-laced synthetic drilling muds during exploration has been averted following community opposition.

QGC/Shell applied to the Department of Environment & Science in Queensland in early June to be given approval to use the currently banned BTEX (benzene, toluene, ethylbenzene, xylene) compounds in synthetic drilling muds under its Authority to Prospect (ATP 645) on the Western Darling Downs near Glenmorgan. BTEX is a serious groundwater contaminant with public health implications.

The 150-page application was produced by AECOM, an American multinational engineering consultancy. After becoming aware of the application, which was classified as a minor amendment to an existing Environmental Authority, community members became active in seeking clarification on its legality from both the Department and the Minister for Resources Scott Stewart.

The use of BTEX in drilling compounds (SBMs) was banned in August, 2010 by Minister for Natural Resources, Mines and Energy and Minister for Trade, The Honourable Stephen Robertson. He committed to legislate to ban them from ever being used in Queensland. The NSW Government followed suite in March 2012, banning BTEX for use in hydraulic fracturing (fracking) and coal seam gas drilling.

This application from QGC/Shell requested to remove Condition 102 of Environmental Authority (EA) EPPG00839513 prohibiting the use of SBM: Condition 102 – Synthetic based drilling muds must not be used in the carrying out of the petroleum activity(ies).

Shell/QGC had proposed to use Saraline 185v and Escaid 110, they exceed the human health drinking water guidelines for all four compounds and in one instance, benzene, by up to 600 per cent. Toluene has no safe limit in drinking water. They contain synthetic based oil, brine, emulsifiers, organophyllic clays, lime, loss additives, weighting material (typically barite), wetting agents, and rheology modifiers.

Shell/QGC justify using SDMs by saying that the BTEX concentrations are less than naturally occurring toxic compounds found in the coal seam and that there is no “direct” pathway between formations and groundwater. They claimed that “no further assessment was warranted”.

Migration of increased concentrations of BTEX compounds to groundwater cannot be ruled out and compromising groundwater so that QGC/Shell can have improved “long term operational efficiencies” and “reduced drilling timeframes” is completely at odds with the reasons given by the Queensland Government for banning drilling muds containing BTEX in the first instance. What is cheaper for QGC will cost the environment, the health of landowners, workers and potentially the groundwater.

Furthermore, QGC/Shell characterised their withdrawn and currently illegal amendment as being “minor”. There should be no leveraging of EAs using so called “minor” amendments to sneak through a reversal of a major policy position.


The ABC Southern Qld Local News featured a short headline stating the application has been withdrawn by QGC who claimed it was lodged in error. Shay Dougall, Landholder Advocate from south-west Queensland says it’s unclear whether the substance (BTEX) is included in the ban on similar chemicals “We’d like some clarity about what the actual legislative ban is.”