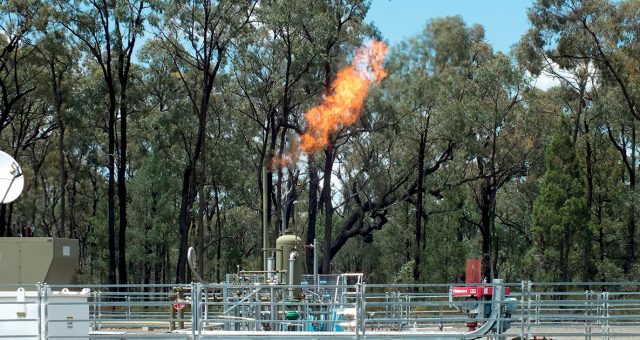 Coal seam gas (CSG) is methane (CH4) gas that is held in coal seams. It differs from conventional gas, which has been Australia’s primary gas source, because it requires unconventional methods to extract.
These methods involve removing the groundwater from the coal seam, producing enormous volumes of waste. A cocktail of dangerous chemicals is used to drill, with or without fracking.
New South Wales has been under threat from coal seam gas expansion for many years. The NSW Government recently released it’s “Future of Gas Statement” and cancelled several Exploration Licences leaving four licences in the north-west of the state.
The remaining four licences that cover the Pilliga Forest, the World Class agricultural region known as the Liverpool Plains and the Namoi floodplain are knowns as PELs 1, 12, 238 and 427.
Gas company Santos have indicated that they intend to perform on-ground operations in PELs 1, 12 & 238 in Q4, 2022 and have recently purchased the Queensland Hunter Gas Pipeline route.

Santos is preparing to drill 850+ CSG production wells in the Pilliga Forest and surrounding farmland over four phases building on their already existing exploration gasfield. At 95,000 hectares this is the largest project ever proposed in NSW. The project is also the most controversial, generating a record-breaking 22,700 formal objections. Across 3.2 million hectares of North West NSW, community surveys show that 96% of people wish to remain gasfield free.
Phase 1 will involve carrying out further exploration and appraisal activities, including: seismic surveys; core and chip holes; drilling up to 25 pilot wells; and installing ancillary infrastructure to support these activities (access tracks, gas and water gathering lines, flaring infrastructure).
The company is facing opposition to their plans from a wide swathe of the community including Gomeroi Traditional Owners.

Santos is preparing to reactivate and conduct exploration activities on the Liverpool Plains in PELs 1 and 12. These Licences were renewed and came into effect from 12 April 2022 for six years until 12 April 2028. Santos has joint venture operations with Australian Coalbed Methane and Carbon Minerals. Licence conditions include undertaking an agreed works program.
Activities will include maintenance of existing infrastructure and a seismic acquisition program (geological studies) and also the reactivation and operation of the Kahlua multi-well pilot located in PEL 1 on Goolhi Rd, Marys Mount.
The seismic program will focus on the area south-west of Gunnedah and may include the Lake Goran area and Wandobah Rd. Santos have claimed TSRs and Crown Land are not involved.

Risks to Our Water

MYTH: CSG will have limited environmental impact on underground water
FACT: Coal seam gas extraction would risk groundwater that sustains farms, flora and fauna and communities across inland Australia. Santos will drill through the crucial recharge aquifer of the Great Artesian Basin (GAB) to extract gas extracting large volumes of water to enable the gas to flow to the surface. De-watering the coal seam will eventually cause aquifer drawdown, subsidence and loss of head pressure to bores.
Toxic wastewater and drilling fluids spill and leak, contaminating water and ecosystems. In the Pilliga, Santos has already been fined for contaminating an aquifer with uranium and other heavy metals and for a spill of 10,000L of wastewater that caused a forest ‘dead-zone’ which is still un-remediated 10+ years later.
Wastewater could produce up to 840,000 tonnes of brine waste with no known disposal solution.
Santos have published their NSW Government approved Waste Management Plan for Phase One.
Groundwater contamination: Failure of CSG well casings is inevitable. Steel casings corrode and fail – causing gas leaks and contamination of fresh water supplies.
Groundwater depletion: In QLD, the Office of Groundwater Impact Assessment has shown that a total of 702 water bores are predicted to be impacted in the long term, of which 108 are predicted to be impacted in the next three years (Immediately Affected Area (IAA) bores).
Aquifer connectivity and faulting: A CSIRO/GISERA ‘Assessment of faults as potential connectivity pathways’ has been concluded. It states “Geophysics indicate the presence of some faults and fractures which could act as potential pathways for movement of water and gas.”
Santos did not disclose any knowledge of this likelihood to the Water Expert Panel assessing the Narrabri Gas Project.
Hydraulic fracture stimulation: Santos have only committed to not fracking as part of this particular Development Application. NSW Planning has highlighted a short condition to this effect. Adaptive management via modifications to the Development Consent are likely to see hydraulic fracturing be applied for at a later date.

MYTH: Agriculture & coal seam gas can co-exist
FACT: The Queensland Experience has shown us otherwise. Co-existence is not a reality, it can best be described as forced co-location. Farmers in south-west Queensland have been forced to defend their property against deviated drilling which causes subsidence and loss of productivity. They face a time consuming regulatory quagmire which they must navigate at their own expense.
Insurance company IAG said for customers who “have operational CSG or shale gas activities or infrastructure on their property, such as a coal seam gas well, we will be unable to provide [public] liability cover as part of their insurance policy”.

MYTH: Coal seam gas will create jobs in the region
FACT: Chinchilla, a similar size to Narrabri, went from a prosperous rural town to a booming gas mining town, to a welfare town with high levels of unemployment, crime and drug addiction. Miles suffered a similar fate.
The Narrabri gasfield would destroy jobs in other local industries. For every job created in the CSG industry in QLD, 1.8 jobs were lost in agriculture and 0.9 jobs lost in the service sector. Santos’ gasfield poses direct and indirect threats to existing long term sustainable industries, such as agriculture, tourism and manufacturing.

MYTH: Gas is a transition fuel between coal and renewables
FACT: Volatile organic compounds and hydrocarbons, including the carcinogen benzene, are released from vents, holding tanks, ponds, compressors and other infrastructure. Experts now say that gas is not cleaner than coal. A report by Australian energy industry veteran Dr Andrew Grogran reveals that Santos has underestimated emissions. Stories published show Santos has misrepresented the gas composition data of the Gunnedah Basin.
In 2014 the CSIRO measured emissions at 37 CSG wells in QLD and 6 in NSW. Only 3 had no fugitive emissions. Air pollution poses potential risks to workers and people living nearby. Methane, a potent greenhouse gas, adds to the serious health risks of climate change.

MYTH: NSW needs Narrabri Gas for energy security and reliability.
FACT: NSW does not have large gas reserves. Gas was produced from coal in gasworks in Sydney until a pipeline from Moomba SA supplied conventional gas to the city in 1976. Santos provided the gas and AGL retailed it, reducing the city’s pollution. Since then all NSW gas has been imported from other states except around 4-5% from AGL’s coal seam gas wells in Camden.
Pegasus Economics published a report in 2019 revealing that the Narrabri gas project would do nothing to reduce prices, and would instead be the most expensive gas in eastern Australia at over $9/GJ.
Australia is swimming in export gas and Moomba in South Australia has 20 years supply of gas and a pipeline to Sydney. The east coast of Australia has multiple import terminals in the planning stages that could be built before the Narrabri Gas Project.

Bushfires & flaring are a catastrophic risk

MYTH: Santos has a bushfire management plan.
FACT: The Pilliga Forest is prone to bushfire. The Rural Fire Services (RFS) say gas extraction and infrastructure escalate the risk of a fire spreading and increase the danger to firefighters. The risk of gas infrastructure igniting and further inflaming bush fires is too great for some volunteer firefighters who refuse to fight fires in gasfields.
Santos has not demonstrated its claim that the cumulative risks of initiating a bushfire from wells and processing facilities is low. The company’s hazard register does not appear to include hazards and risks to public safety from:
• Blowouts – the uncontrolled release of gas from a well after pressure control systems have failed.
• Risks associated with the power generation plant at Leewood
• Pipeline inspection gauge launch and recovery
• Other infrastructure within the pipeline corridor e.g. a second pipeline and power transmission cables

Jobs; but not many

MYTH: Coal seam gas will create jobs in Narrabri, giving the town’s economy a significant boost.
FACT: In four years, Chinchilla, a similar size town to Narrabri, went from a prosperous rural town, to a booming gas mining town, to a welfare town with high levels of unemployment, crime and drug addiction. Currently houses are being sold for less than a 1/3 of the build cost.
Santos’ gasfield poses direct and indirect threats to existing long term sustainable industries, such as agriculture, tourism and manufacturing (recently revealed)*. The Narrabri gasfield would destroy jobs in other local industries. For every job created in the CSG industry in QLD, 1.8 jobs were lost in agriculture and 0.9 jobs lost in the service sector.

MYTH: People in the Narrabri district want the Narrabri Gas Project to start.
FACT: Door to door surveys found 28% of Narrabri residents support the project, 52% were against and 98% were in favour of renewable energy development.* In shires surrounding Narrabri, 98.7% of the population, that’s 7,000 people over 3.2 million hectares, have vowed to oppose the Project and to block pipelines, linking the project to the east coast gas network.
Thirty-five councils in NSW oppose the development of CSG in their region, and another fourteen councils have declared their concern about CSG.