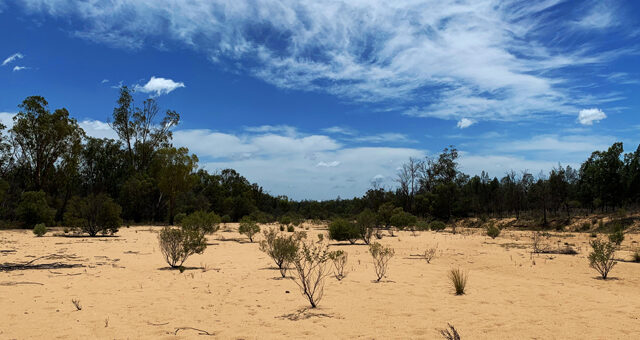 A delayed GISERA/CSIRO report on underground connectivity has revealed fault-related vulnerability of groundwater particularly in the north west of the Narrabri Gas project area, represented by the localities of Bohena Creek, Wilga Park and Yarrie Lake. Faults are geological structures which can allow movement of gas and contaminants from the coal seams to aquifers.

The long-awaited Assessment of faults as potential connectivity pathways has been finally released with no media and no announcement, just as a quiet addition to the GISERA and CSIRO websites. This important study was not released until late April 2022 after being initially due for completion by the end of 2020. It was unremarked upon by the gas industry, and was not reported on by Santos to the May meeting of the Narrabri Gas Project Community Consultative Committee.

Despite the claim of “no prima facie evidence” of “significant connectivity”, a serious concern of groundwater users of the Namoi Alluvium and the Great Artesian Basin, the truth appears to be hiding in plain sight in the report, whose full name is Assessment of the influence of geological structures on aquifer connectivity in the Pilliga Forest area, NSW – an integrated hydrogeological, geophysical, hydrochemical and environmental tracer approach.

There are growing indications that Santos is not being transparent with the NSW Government about the hydrogeological conditions present at its Narrabri Gas Project. Santos has yet to submit the Field Development Plan for the proposed 850-well gas field.

Two things are clear from the Report. First, fault lines appear under Bohena Creek, the ephemeral sandy waterway (pictured above) which traverses the Pilliga Forest south to north. The second is that the protective “aquitard”, the rock formation which Santos relies on in its claims that there is no connectivity between its drilling and the Namoi Alluvium, thins out and disappears in the north and north west of the Narrabri Gas Project.

CCC members probed the company’s representatives for answers about what notice, if any, had Santos provided to any NSW Government Authority or interested body of finding more “faults” or suspected weakness in the geological strata between the surface and the coal seam that Santos targets for gas or other fossil fuel extraction.

The Narrabri Gas Project Water Technical Advisory Group, a sub-group of the Narrabri Gas CCC, met on February 16th 2022, GISERA (the Gas Industry Scientific Environmental Research Alliance) gave a presentation in which they used the same wording that is repeated in the new study: “No prime facie evidence was found for significant connectivity pathways between the coal measures and the Pilliga Sandstone aquifer.”

The risk of leakage – euphemistically referred to as “interaction” – between the Namoi Alluvium and Great Artesian Basin (GAB) aquifers, and the water chemistry differences between coal seams and overlying formations, were subjects of concern by CCC members. Santos rejected suggestions that corrective action triggers being proposed are not fit to protect the high value water sources like Namoi Alluvium and GAB aquifers.

At the May 2022 CCC meeting, Santos failed to respond adequately and appeared evasive in the face of heavy questioning by Narrabri-based community group, People for the Plains:

“With regard to the GISERA Presentation, these questions centre around the geo faults found through seismic testing.

Like the GISERA/CSIRO study from Queensland which was widely lampooned for making assertions about the safety of hydraulic fracturing based on a small handful of selected Origin coal seam gas wells, there are questions about gaps in the latest fault study.

“Faults, igneous intrusions, and their associated hydraulic properties have not been considered in the groundwater models developed to predict potential impacts from the proposed Narrabri Gas Project or subsequent groundwater models (as discussed by Turnadge et al., 2018; NSW DPIE, 2020).” (page 12)

No mention is made in the new fault study of historical hydraulic fracturing which spanned over a decade. There is no mention that important data used by the study is taken from a nested bore that has been placed between two previously fractured wells and whose well completion reports display evidence of underground fire, water flows and gas kicks and no mention of BTEX or CO2. Finally, there is no discussion of the role that sulphate-reducing bacteria can play in causing microbiologically-influenced corrosion which is fatal to well integrity and can play a role in connecting aquifers to coal seams.

There is no apparent awareness that the NSW Environment Protection Authority (EPA) effectively dismantled Santos’ reporting requirements under the former groundwater monitoring network which severely limits our understanding of the interaction between lower geological Namoi Alluvium. This occurred after Santos persuaded the EPA this reporting was no longer relevant to Santos’ potential impacts. The downsizing included dozens of monitoring points, with some that have in the past shown concerning anomalies.

EPL Monitoring Point 13 is the only point that now monitors the Purlawaugh (since the downsizing) and shows a sudden decrease then increase in Standing Water Level during the same time period that workover operations were occurring (please note the Santos Water Monitoring Portal is 12 months out of date).

Diagrams included in the fault report (above) clearly show fault lines appearing below the blue creek line for Bohena Creek, igneous intrusions are red and the thinning of the protective aquitard, the Purlawaugh formation, is shown in pale pink.

In the diagram below the thinning of the Purlawaugh could expose Namoi Alluvium groundwater users to the risks of contamination from Santos’ underground activities.

The study appears to have been completed before the Narrabri Underground Stage 3 Public Hearing was held in February 2022. There is no mention that “Control” sites on the eastern side of the Pilliga are close to Narrabri Underground coal mine, one of which was decommissioned after pointing to the problems of leakage from the Whitehaven Coal mine into the Digby Formation. The EPA failed to disclose the evidence of leakage from Whitehaven’s longwalls into the Santos gasfield, altering the groundwater chemistry: “NSW Environment Protection Authority did not provide information in its agency advice concerning groundwater migration from the Narrabri Mine to Digby Formation via an unknown pathway.”

This fault study has led to two further avenues of research:

• Geochemical modelling and geophysical surveys to refine understanding of connectivity between coal seams and aquifers.

Over four years after the Independent Expert Scientific Committee called for fault data to be applied to the Santos groundwater model, it is only now happening. Did the faulting study achieve its objective of allaying community concerns? The short answer is no, it has exacerbated them. North West Protection Advocacy has been following this story for several years and we have detailed all the steps along the way. We will be writing more about this study in coming weeks and will further examine the hypothesis of a fault that follows the southern course of Bohena Creek and the thinning of the Purlawaugh aquitard in the west and what this means for areas like Yarrie Lake.