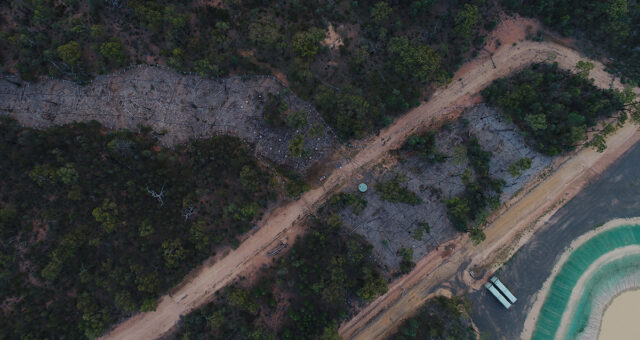 June 2021 marks ten years since this pollution event happened in the forest, signifying a decade of community resistance against Santos and its predecessor Eastern Star Gas which Santos bought in 2011.

It was 4am on the 25th June, 2011, when a pipe burst, a fail-safe switch failed and a conservatively estimated 10,000 litres of toxic coal seam gas waste went slowly flowing onto the ground in the Pilliga East State Forest. The Pilliga in its entirety is the largest temperate woodland in Eastern Australia and threatened by an 850-well coal seam gas field.

Eastern Star Gas maintenance staff would have recognised the characteristic odour of raw produced water when they arrived at work that morning and realised that there had been a loss of containment (LOC), this is industry-speak for a leak or spill. Gas waste has an unmistakable smell that is hard to describe, it’s fetid, you know it smells wrong.

Images above of the spill at Bibblewindi by Tony Pickard

What the gas operator did in the crucial 24 hours after discovering this spill was not, as required, to immediately notify the regulator – the spill was not reported. The spill was reported to the authorities by the community. Santos also failed to report other compliance issues (detailed in the Judgement which can be found here online).

Santos entered an early guilty plea on all four charges and has since tried to downplay the seriousness of the events. Santos knew it had inherited a facility with problems. The company told the NSW Environment Protection Authority in a letter dated 27 March 2013: “The Water Treatment Plant, which was shut down soon after Santos acquired Eastern Star Gas in late 2011 had a history of operational problems and failures since installation.”

This is similar to some of the infrastructure in Queensland that has been witnessed in that the problems have been present since installation. The leaking well in the video linked above was reported to the regulator but no action was taken.

A massive public relations effort has attempted over the years to distance Santos from Eastern Star Gas, but the crisp blue shirts, attractive staff and the glossy images haven’t worked. Promotional stunts like sponsoring the Santos Tour Down Under, the Santos Festival of Rugby in Narrabri and a host of other sponsorships and community initiatives have not wiped the memory of coal seam gas spills in the Pilliga.

The Bibblewindi coal seam gas pollution event casts a long shadow. It is indicative of Santos’ attitude Australia-wide including Queensland, as North West Protection Advocacy discovered in Freedom of Information documents obtained from the Queensland Department of Environment and Science (DES).

Almost a decade later, NWPA can report another pollution event resulting in a Penalty Infringement Notice (PIN) with Santos being fined $13,055 in Queensland. It bears similar hallmarks to the Bibblewindi spill.

This new pollution event was not reported on by media. It was noted in the 2019 Santos Annual Report in very small type.

The incident relates to another loss of containment. On 19th May 2019, 33,000L of produced formation water leaked into a watercourse following the failure of a cooling line within the Fairview-Arcadia Project Area when a pump was fitted with a cooling line made from an inappropriate type of metal (copper instead of 316 stainless steel). DES noted in their letter to Santos regarding this PIN that Santos ‘appear to not have accepted accountability or culpability of their actions’ and ‘have also had similar offences over a period of time’.

This loss of containment (spill) occurred adjacent to the Dawson River/Hutton Creek in PL 92, 41km from Injune. This is the same area that Santos have applied to increase their release of untreated coal seam gas wastewater during flooding events into the Dawson River.

On the 10th anniversary of the Bibblewindi spill, nothing has changed at Santos. From their own investigations, DES, clearly show Santos’ track record of accidental releases of coal seam gas waste to land and watercourses continues unabated across borders. Citizen mapping shows at least 20 historical pollution sites in the Pilliga.

With 850 coal seam gas wells planned by Santos as part of its Narrabri Gas Project, the prospect of accidental releases because Santos chooses to use inappropriate materials, or for any other reason, is enormous. You can read more about the history of operations in the Pilliga forest here.