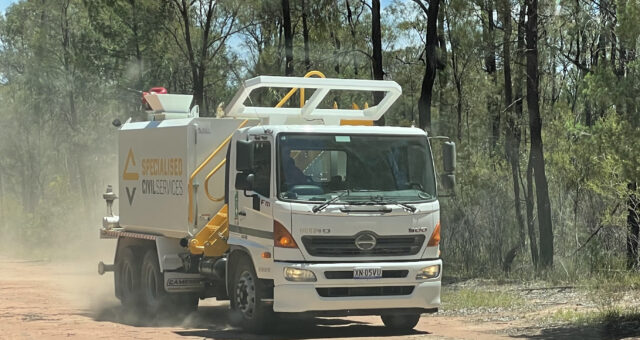 Contractors to the coal seam gas industry need to be aware of the reputational risks they incur by taking on contracts that may appear lucrative, but attract far more scrutiny than other industries they might be capable of servicing. These businesses need to understand the history of the gas industry and the reasons it is regarded with suspicion and watched closely.

Events in the Pilliga East State Forest last week highlighted the scrutiny that is on the coal seam gas industry, including Santos and its contractors. A Santos contractor, Specialised Civil Services, learned what this scrutiny felt like when it encountered a convoy of civilian vehicles highly suspicious of its business in the back roads off the Newell Highway.

Suppliers like Specialised Civil Services should expect that their business will be scrutinised because of the past history of mishandling of waste by the coal seam gas industry. Because of this history, community members are rightfully concerned about coal seam gas waste.

Specialised Civil Services vehicle could have been carrying fresh water from one of Santos’ nearby groundwater entitlements, to water the rehabilitation areas which Santos has been attempting to restore following the legacy of toxic spills from past operator Eastern Star Gas.

Tankers roaming around gas fields inevitably attract public suspicion.  Fears about improper disposal of liquid waste from the CSG industry, also known as “produced water”, “brine” or “co-produced water” is not based on speculation but on documented history.

Nearly 98% of submissions to the Narrabri Gas Project Environmental Assessment objected to the 850+ well proposal, showing that trust in this industry to protect public health and groundwater is very low. In fact, the industry is so unpopular it is said to have no “social licence to operate”.

The following are just a handful of the incidents perpetrated by coal seam gas industry contractors involving unlawful disposal of waste.

Santos still does not have a brine crystalliser at its Leewood Water Treatment plant just south of Narrabri, so is reliant on a variety of means to reduce its stockpile of brine waste. Methods include evaporation, which is outlawed in NSW in most circumstances but tacitly condoned at Leewood without any pro-active stance by regulator, the NSW Environment Protection Authority. See our previous news story, Banned evaporation ponds are the cheapest option for dealing with coal seam gas waste.

In 2013 the NSW EPA launched an investigation of a “missing” 212 tonnes of contaminated waste from a former AGL coal seam gas drilling operation in the Hunter Valley. Bettergrow Pty Ltd denied it had accepted the waste, and the investigation closed when the EPA passed the information to the then Department of Resources and Energy. The EPA was reported to have later claimed to The Sydney Morning Herald that it did not have any information of the missing waste.

The expense and difficulty of disposing of this waste has led to suspected roadside dumping, spraying on roads and, infamously, AGL’s attempt to discharge the wastewater in Hunter Water’s sewage network via its contractor Transpacific Industries despite the water agency rejecting the waste even after treatment.

After Hunter Water refused to accept the AGL waste, the company was forced to transport it using company Toxfree to Narangba, Queensland, to be treated and disposed of at an ocean outfall via UnityWater, the water and sewerage operator in the area.

Another investigation by the Newcastle Herald revealed a cover-up, this time of Santos waste at Summerhill Waste Depot. Serious concerns were raised about the waste which included ‘‘soil, sediment and pond liner materials’’.

Desperate for ways of concocting “beneficial uses” for its waste, Santos was also found to be conducting irrigation trial at Leewood without regulatory approval, and incurred a fine for not have a Water Use Approval. The unapproved irrigation trial was discovered by the public, not the regulator, highlighting the need for community co-operation with the EPA.

The other disposal option, which is practiced widely in Queensland coal seam gas fields, is spraying on roads under the pretext of dust suppression. In Queensland in March, 2018, members of North West Protection Advocacy conducting a tour of the Queensland gas fields with a group of farmers came across the scene of an unregistered tanker spraying what smelt like raw produced coal seam gas water on a public road at Fairview, near Injune. This was reported to the Queensland regulator but ultimately no action was taken.

Narrabri-based waste contractor Namoi Waste is known to transport drilling waste across the border to Queensland. The community-made short video Polluting the Pilliga describes the role of Namoi Waste in disposing of drill cuttings from Whitehaven Coal’s Narrabri Underground mine to NuGrow, a Queensland-based soil products company that was accused of selling fertiliser for compost laced with PFAS waste.

Santos still has no solution for its waste problem, although suspicions are high that a landfill in the town of Gunnedah is intended as the disposal point, possibly for temporary storage and further transport elsewhere, since Mackellar Excavations quietly lodged a State Significant Project application for the Gunnedah Waste Disposal Facility just prior to Christmas 2020.

A toxic waste dump or transfer station in the aspirational town of Gunnedah would be a huge insult to the pro-mining Council.

The community has been thrust into the role of monitoring the dangerous coal seam gas industry, and the public will continue to track the work of contractors and others in the Pilliga Forest. This is true also of coal mine contractors and suppliers in the Namoi region.

Of several current Namoi region mine prosecutions and major investigations currently underway, it is clear that many have been initiated by public complaints.

There is a growing appetite for information about the gas industry, its processes and impacts. Gas mining is viewed as the biggest climate threat we now face. Field trips like this make it possible for more people to observe the gas industry first hand.

The presence of the NSW EPA on the day was a welcome sight.

This officer was on his rounds inspecting the gas fields and stopped to speak with the group. They took advantage of the chance meeting to report what appeared to be a malfunctioning flare at the Bibblewindi Water Treatment facility.

North West Protection Advocacy continue to facilitate community representatives, members and citizen scientists to inspect the gasfield operations and forest environment safely. Please get in touch with us if you would like to take part in future activities of this nature.

Our account is open for donations: Every single dollar that is given to us allows our volunteers to continue the essential work of protecting the Pilliga. All contributions, large or small, are very much appreciated.