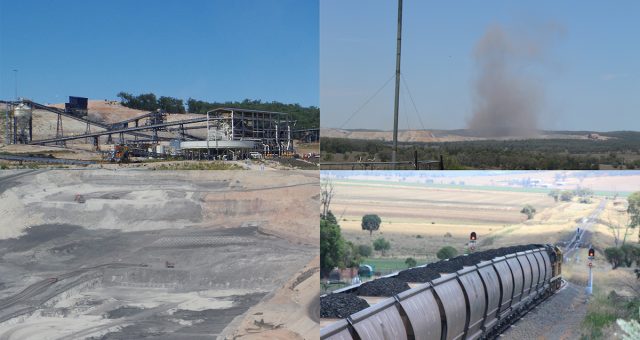 The NSW Department of Planning has inadvertently revealed to the world a fact that Whitehaven Coal would rather not admit. Contrary to claims by CEO Paul Flynn, the so-called Vickery Extension Project going before the NSW Independent Planning Commission is not a mere “extension” of an existing coal mine.

It is in reality a plan for a brand new, major coal hub that will include not only the 10 Million Tonnes Per Annum megamine, a 13 Million Tonnes Per Annum Coal Handling and Processing Plant (CHPP) which will import coal from other mines, and a network of rail spurs to connect other Whitehaven mines in the region such as Werris Creek, Maules Creek, Tarrawonga and Narrabri Underground mine.

For months, the spin emanating from Whitehaven Coal and the NSW Department of Planning has been that details of the Vickery Project were “well-known” and that it is a project approved in 2014 which didn’t warrant a lengthy Public Exhibition period. The Department and Whitehaven made much of the fact that the basic 28-day period was extended to 42 days, inferring a great level of magnanimity that any extension was granted at all. Throughout November, strenuous representations were made by community groups and senior representatives such as Nationals Kevin Anderson MP for Tamworth, whose electorate takes in part of the Vickery Project, calling for a longer extension to allow drought-affected communities more time to assess the 4,000 page Environmental Impact Assessment.

The calls were declined by Planning Minister Anthony Roberts.

Central hub to receive coal from other Whitehaven mines

“A fundamental change proposed …is to construct the CHPP and rail load out facility at the project site and make this the central hub to receive coal from other Whitehaven mines.”

North West Protection Advocacy has previously reported on some of the submissions that were made on the Vickery Coal Hub EIS, including the NSW EPA which is highly critical of the Vickery project in its present form.

Vickery is a small locality just minutes drive outside the small town of Boggabri in the Namoi River valley. Boggabri itself is already suffering from pollution resulting from being a mere 20 km from the Leard Forest Coal Mine Precinct, which currently produces in excess of 20 Million Tonnes Per Annum of open cut coal, and already has around 20 coal trains passing through the town on the Moree-Newcastle railway line daily.

The Boggabri Farming and Community Group includes farmers, small business owners and community members. They accept that coal mining is part of their reality, but say the town has not received its fair share of the economic benefits from coal expansion. The industry’s refusal to buy locally has been one bone of contention for some time, with the local butcher in a constant state of financial distress despite a large worker camp owned by CIVEO being in Boggabri itself. A Gomeroi Aboriginal contractor providing services to Whitehaven told NWPA,

“We asked Whitehaven to order their landscaping supplies through the local supplier but they refused, as they said they have bulk purchasing arrangements.”

They also complain bitterly about the social impacts, which include purported health impacts from coal dust and blasting of overburden which occurs many times throughout the week.

The Boggabri residents have a particular grievance about Whitehaven Coal resisting a dust monitor in the town. In June 2017 at the NSW Clean Air Summit, NSW Environment Minister Gabrielle Upton announced the formation of the Namoi Regional Air Quality Scheme, but Whitehaven continued to resist contributing to the cost of a publicly available air pollution monitoring system.

At a Public Meeting convened by the Department of Planning in September 2018, local landowner, community worker and member of the Joint Mine Community Consultative Committee Ms Julie Heiler addressed the packed Boggabri Golf Club, and the Departmental officers in particular:

“Once the mine is licensed… your department leaves the community to deal with the issues by themselves… we have asked for your Department and the EPA… nobody has come. I don’t believe Whitehaven has social licence to operate in this community [loud applause]. We want companies to take responsibility, not to tell us they are not making dust… not telling us we do not have cracks in our houses. The gentleman who asked about water… we have a borefield above our property and our bores have gone dry, and Boggabri Coal[1] is carting water 3 times a week… we have sold the majority of our cattle… we are no longer drought-proof, we are covered with dust. I would suggest the EPA and the Department of Planning come to our area. We are not complaining just for the sake of complaining. 10 years ago… we were able to co-exist…”

But no more. Co-existence with Whitehaven is not possible. The people of Boggabri are saying no to Whitehaven’s Vickery Coal Hub.

You can apply to speak at the Vickery Coal Hub Public Hearings:

[1] Boggabri Coal is a 100% Japanese-owned coal mine also near the town of Boggabri. Originally proposed as a “boutique” coal mine, Boggabri Coal gained consent for an expansion to 8 Million Tonnes per Annum. Nevertheless, Boggabri Coal has distinguished itself from Whitehaven Coal and has strong following due to its good faith dealing with the community. It is carting water to the Heilers without admitting responsibility for the loss of their groundwater.