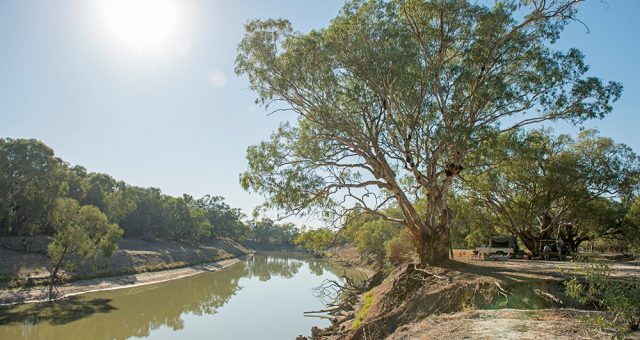 A crowdfunder has been set up to support the Action
Gofundme Blockade On the 13th of March, the Darling River community will blockade the bridge at Wilcannia. We are calling for an end to water trading in Australia. The people of the Darling river at Wilcannia and Menindee have been fighting the government for 30 years over the corruption, over-allocation and water speculation that has now destroyed our river systems and the cultural heritage of the aboriginal people. This struggle is critical for the survival of rural Australia. Desertification of inland Australia and total ecological collapse is immanent without large scale reform of a broken system that privileges multi-national corporations and export crops over the survival of its own citizens.

Earlier this year we followed Ian Sutton’s journey from the headwaters of the Murray Darling downstream and published Part 1 and Part 2 of Ian’s Fact Finding Tour. For the last few weeks Ian has been investigating the area around Wilcannia.

On the 25th of February, 2020, Aunty Beryl Philp-Carmichael, Barry-Allan Stone and Ian Sutton sent the below letter to the Prime Minister as a last-ditch effort to prevent their community from dying as their river is.

The community in Wilcannia will gather on the bridge on Friday 13th March to protest the ongoing destruction, demanding change in the way water systems are managed. The letter has been sent in front of this action.

Of the letter Ian Sutton says:

“We have made every effort to ensure the letter represents to feelings and thoughts of the community. We have spent the better part of a week visiting community members and community leaders and ensuring that all opinions were met in the wording of the letter.

We the people of Western NSW have been disgusted in the way we have been betrayed, with the desecration, drainage and destruction of our ground water, river systems, wetlands and lakes. This has resulted in the devastation of our plants and animals, the expansion of desertification throughout the Murray Darling Basin, increased climate extremes and a rural economic collapse.

We have been protesting, rallying and lobbying successive government for over 30 years and in that time, we have been ignored. We feel that you no longer represent the people of western NSW and instead are colluding with corporate interests to the detriment of our nation.

It has reached the point where we the people need to take stronger action if we are to avoid the death of the Riverland and wineries in South Australia, the loss of sustainable agriculture in Victoria and a complete rural economic collapse in NSW. If the Menindee Lakes remain dry then western NSW will die and there will be no future for rural communities, farmers or the Barkandji and Ngiyeempaa Traditional Owners.

The Australian Commonwealth Government has been unlawfully corporatised, largely commencing in 1994 when the acting Government committed to a National Competition Policy, bringing market disciplines to the delivery of many services provided by state governments. This led to the corporatisation of all water supply arrangements and in practice each state had to transfer ownership of its water supply and delivery infrastructure to a company. This unlawful process occurred without any consultation or approval from the Traditional Custodians of this land who have the lawful rights too and responsibilities for this water.

During this corporatising of government services, water licences were detached from land title. As reforms progressed further, it was decided to define water licences as shares and issued in perpetuity. This led to conditions that regulate the use of water at any location defined using separate policy instrument, resulting in entitlement and allocation trades being able to be executed without having to consider the nature of any social, environmental or economic impacts resulting from a decision to move water from one location to another.

Separate works approvals and delivery entitlements were then implemented. Unbundling of water licences drove structural adjustment and led the system to trade into trouble. In the Murray Darling Basin an over-allocation problem emerged due to market disciplines, creating massive mismanagement and inequity within the water trading and water sharing processes.

In addition to a reduction in return flows due to over-extraction, surface water trading has increased groundwater use and reduced the amount of groundwater that returned to the river. This problem has worsened as the value of water has increased. Seeking to capture this value, landholders began to divert overland flows that previously reached the river, as well as diverting river flows into private storage dams.

As of 8th December 2008, the Federal Government took jurisdiction from the states regarding water trading, including water charge and water market rules. Because of this we are holding your office responsible for the resulting devastation. The Water Amendment Act 2008 was enacted following a partial referral of powers by the Basin states to the Commonwealth. The amendments related to the transfer of functions from the former Murray-Darling Basin Commission where states had jurisdiction, to the Murray-Darling Basin Authority where the commonwealth was given partial jurisdiction.

Finally, while the entire community in western NSW were demanding action on the Murray Darling Basin plan and pleading for leadership over the looming rural economic collapse, the government was negligent. It was a kick in the guts when on 7th February 2020 the Water Management (General) Amendment (Exemptions for Floodplain Harvesting) was enacted which exacerbated the already dire situation, making it easier for corporations to access our water by making them exempt from the requirements for holding a water access licence or a water supply work approval, when doing flood plain harvesting.

Due to corruption and mismanagement over water licensing decisions and water sharing plans, present and previous state and federal governments have acted unlawfully, resulted in unacceptable social, environmental and economic impacts. Critical water accounting arrangements and allocation arrangements are not consistent with hydrological realities and the negative impacts of this are nation-wide and have abridged our right to use water.

As a response to your inaction over the degradation of the Murray Darling Basin, the community will be peacefully blockading the Wilcannia bridge on Friday 13th March 2020. We are no longer asking; we are demanding change in the way our water systems are managed. Your corruption and mismanagement have led to a catastrophic environmental, social and ecological disaster for which you accept no blame or responsibility for. You have also demonstrated to the people that you are not willing or capable of providing a duty of care for Australian citizens, nor provide any solutions for the current state of the Murray Darling Basin.

Our primary demand is that water be taken off the market and water trading ended in Australia. Water is not a commodity! We also demand an immediate embargo on river diversion, flood plain harvesting and pumping of rivers by irrigators upstream. We must allow the current flood waters to fill the Menindee lakes and to provide a proper flush for the Darling Baaka, with full connectivity all the way to the junction with the Murray.

The First Nation peoples of this land have always been custodians of this water and are responsible for it under First Law. First Law dictates that water cannot be owned by anyone, as it is here for all to share.

Since your office has demonstrated that they will not work for us or with us, we are driven to take the appropriate actions ourselves to ratify this critical situation.

Hi all, we have posted our letter to the Prime Minister :). We have made every effort to ensure the letter represents to feelings and thoughts of the community. We have spent the better part of a week visiting community members and community leaders and ensuring that all opinions were met in the wording of the letter.

Water Is Life !!
Cooperation Is The Key !!
United We Stand !!

You can personally help this letter be seen by signing this petition: We demand water be taken off the market and water trading ended in Australia – sign here

Why are politicians ignoring their constituents when it comes to CSG and mining licences covering farmland? https://twitter.com/singletonargus/status/1525238085822607360

Ignore the CWA at your peril - the state's largest rural grassroots advocacy group, described as having 8000 voices, wants better protection for farmland and no CSG. Are our politicians listening to these women?https://www.singletonargus.com.au/story/7736764/farmland-divisions/

We look forward to continuing our relationship with Sue Higginson MLC who has always been a supporter of DEG. https://twitter.com/SueHigginson_/status/1524560969724497920

I’m so excited! I will be working inside and outside Parliament for climate action, to reverse the extinction crisis, for truth treaty voice and to end the inequality crisis. https://twitter.com/nsw_upperhouse/status/1524555955832193025

Girilambone had 73mm of rain on the 12th May. Can the @NSW_EPA reassure the public that Santos Soda Ash (Brine) Concentrate Trial at the Murrawombie Mine was appropriately covered and all care was taken to minimise harm to the environment? #NSWpol #NarrabriGas #CSG